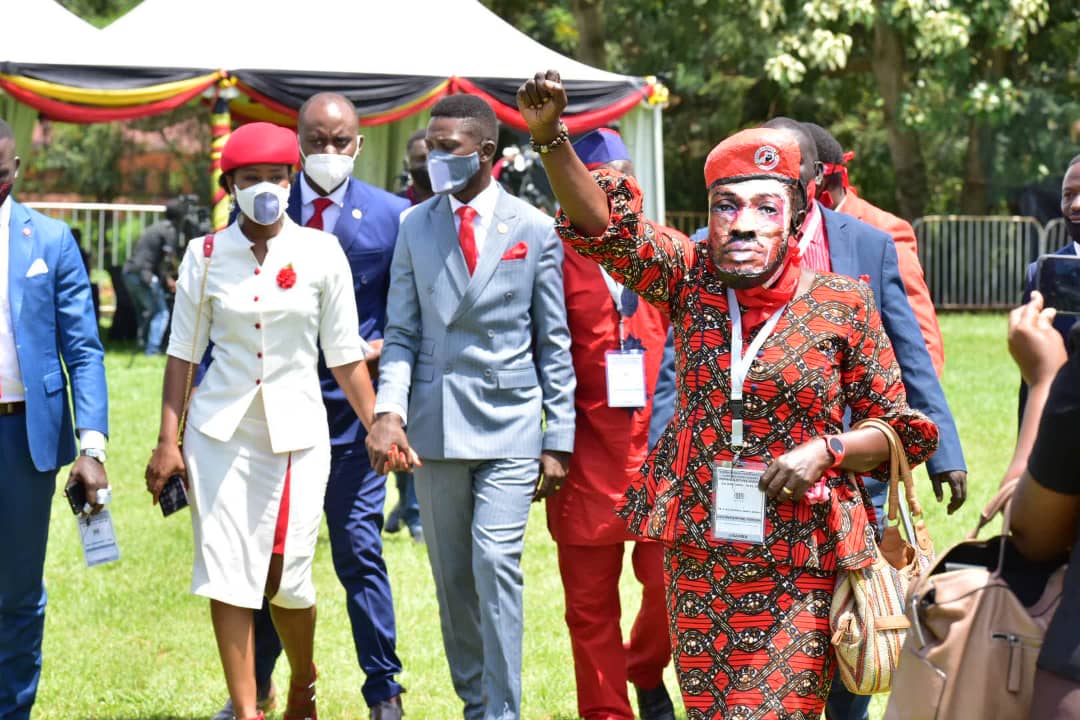 Presidential hopeful Robert Sentamu Kyagulanyi reveals to his supporters that getting on the ballot after today’s nomination means that they are now in boxing ringing and they will only get out of it when they win.

Kyagulanyi who is contesting for presidency for the first was arrested by police and other security organs immediately after he was nominated by the electoral commission at Kyambogo and whisked away to his home in Magere.

Kyagulanyi has planned to move to the national unity platform party headquarters to unveil his manifesto before the nation which has not been possible.

Upon reaching his home in Magere in Wakiso district, he did not access the premises but rather kept on asking the police and military officers to drive him to his offices in Kamwokya in Kampala to perform the launch of his manifesto.

After a short time police started firing teargas and live bullets to disperse the growing crowds. During the scuffle, some of Kyagulanyi’s supporters and bodyguards were serious injured.

His long time and lead bodyguard, Edward Rogers Sebuffu aka Eddie Mutwe, NUP spokesperson, Joel Senyonyi, Sentamu Kyagulanyi Sentamu the candidate were among those who were seriously injured by security operatives in Magere.

After hours of running battles between security operatives and Kyagulanyi’s supporters, he later entered his gate with his supporters whom he addressed.

On addressing his supporters, Kyagulanyi assured them and the nation that his nomination for presidency automatically qualifies him into being in a boxing ring which he will no get out unless he wins the race.

He also told the nation that this is not going to be a smooth ride since they are going to deal with dictators who don’t want to relinquish power because of their greedy ways.

“We are going to be teargased, arrested, killed but this will not stop us from pushing on with our journey to statehouse.” Said Kyagulanyi while addressing supporters at his home in Magere.

He asked his supporters not to be chaotic but live and run a lawful and clam campaign and let the regime expose its unlawful acts against them.

He further said that what happened in Egypt, Sudan, Lybia, Zimbabwe will definitely happen here in Uganda. But for this to happen, he asked Ugandans to drive fear out of their minds and take the regime heads on.

Kyagulanyi also took a swipe at the electoral commission which he said has visibly exhibited that it is working for one person as well as the security organs. This after the incumbent YK. Museveni yesterday staged demonstrations in different parts of the country which was against the set regulations and nothing was said by the commission but NUP supporters have today not been allowed to roll out their activities.