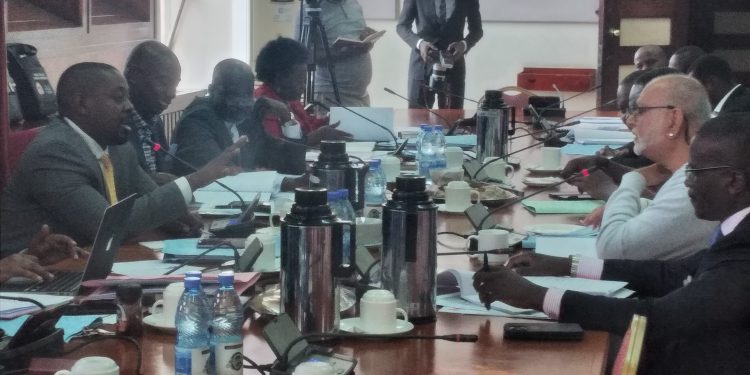 The Ad hoc committee of parliament which investigates the controversial circumstances, through which Nagguru-Nakawa land was parceled out to private investors, has today grilled city pastor Grace Lubega of Phaneroo ministries and Businessman Sudhir Rupaleria on how they acquired possession of government land.

The committee was shocked at the recording period of time that took to process land titles.

The Ad Hoc Committee of Parliament chaired by the Kazo county MP Dan Atwijukire, spent the better part of the day grilling beneficiaries of the Nagguru-Nakawa land on how they acquired government land. Among them was Apostle Grace Lubega of Phaneroo Ministries International who was tasked to explain how he acquired four acres of government land.

Committee members accused Lubega of using police to undermine directives of the minister of lands and continued to excavate the land despite orders of Minister Sam Mayanja who halted works on this contested land.

Lubega cleared himself against claims that there were ministers under his ministries who influenced systems and helped him secure prime land in the Nakawa-Nagguru estate.

Another witness was Dr. Sudhir Ruparelia the director of Meera Investments who got three acres at Shs900m on Nagguru Nakawa Land. The committee was stunned to learn how Sudhir processed a land title in just 24hours.

Committee members faulted the property mogul for hoarding off part of the contested land without a hoarding permit from Kampala Capital City Authority.

The minister of lands Judith Nabakooba also appeared before the nine-member committee and distanced herself from all undertakings of parceling out the land in question, saying everything was done by the Uganda Land Commission before she became the minister of lands.