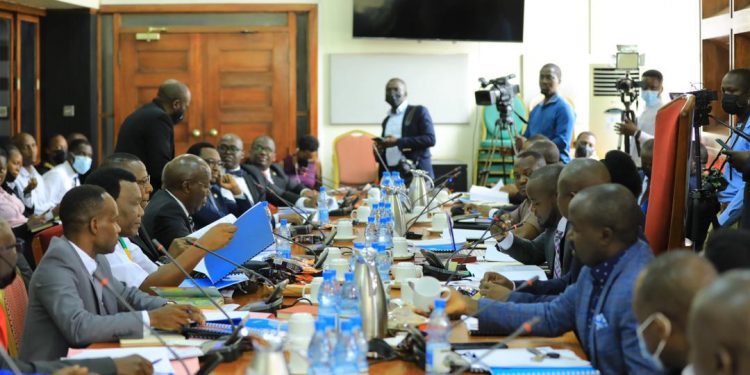 The minister of state for housing Persis Namuganza has denied ever influencing the Uganda Land Commission on the allocation of Nagguru Nakawa land to individuals or companies.

The minister was appearing before the ad hoc committee of parliament chaired by Kazo county MP Dan Atwijukye where she was accused of peddling influence in the allocation of this land.

Members of parliament on the Ad hoc committee which probes the Nagguru-Nakawa land mystery today grilled the minister of state for Housing Persis Namuganza over her role in the allocation of the contested land after examining letters she had written to the commission asking them to allocate land to some companies.

The committee questioned Namuganza on where she got the mandate as a minister to give out government land. It is alleged that the minister used influence peddling and recommended two beneficiaries Amil Damani and Seven Hills to Uganda Land Commission to be allocated land.

Namuganza denied ever asking ULC to allocate land to any company saying that the public is ignorant of the role of the Uganda land commission and they always end up looking for the ministers. She informed the committee that when the public approaches her she forwards their requests to the commission.

Committee members accused Namuganza of smuggling Amil Damani and Seven Hills into the presidential directive which allocated land to Internal Medicine Virginia. The minister busted into the committee and traded insults with the former minister of state for minerals Sarah Opendi who was putting her on the spot.

However, the committee chairperson Dan Atwijukire asked the minister to adduce evidence of the said presidential directives on which she acted to recommend allocations of Nagguru Nakawa land.