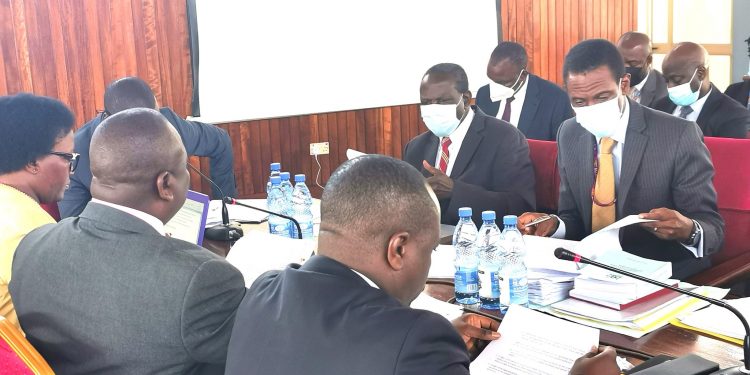 The minister of Finance Matia Kasaija and the Attorney General Kiryowa Kiwanuka a before the committee on trade.

The members of parliament sitting on the committee of trade, industry, and tourism that is investigating the coffee agreement between Uganda VINCI coffee Company and the government of Uganda have been shocked to learn that the government entered into a controversial agreement without seeing the feasibility study of the company which would have formed a basis to sign the agreement.

The minister of Finance Matia Kasaija and Attorney General Kiryowa Kiwanuka appeared before the committee of trade to defend the controversial coffee deal.

The minister for finance Matia Kasaija labored to defend that the government was more interested in having a company to add value to Ugandan coffee than the feasibility study.

This irked  MPs on the committee and the Jinja North division MP David Aga Isabirye asked the minister to retire which caused an exchange of words between the minister and the MPs.

Kasaija later cooled and responded to questions of committee members on the contentious agreement and justified the coffee bill saying it will fetch Uganda a bumper revenue harvest from coffee exports compared to the status quo.

Kiryowa Kiwanuka the attorney General also tendered in defense of the legality of the coffee deal between the government of Uganda and Uganda Vinci Coffee Company and dared anyone in disagreement to go to court.

It should be recalled that the company secretary Moses Matovu was handed over to the parliamentary CID police over his failure to present to the committee the feasibility study.