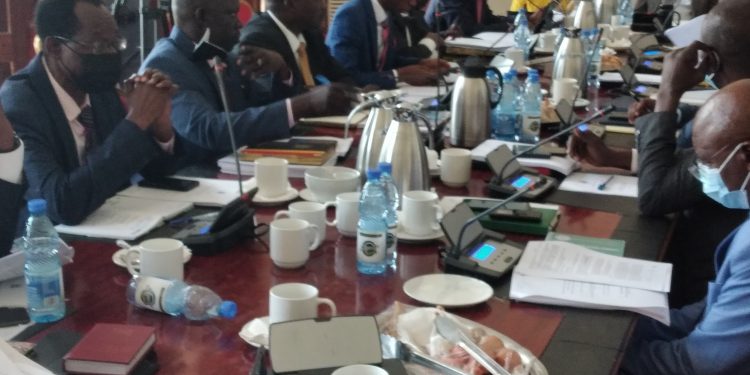 Attorney General Kiryowa Kiwanuka has advised the parliament’s committee on Finance to engage an expert to audit the ongoing construction works at Lubowa international Specialized hospital before they can stop payments.

The committee of finance today quizzed the attorney general together with officials of the ministry of health and ministry of finance on the stalled construction works at Lubowa hospital.

This meeting was a continuation of the MPs’ on-site visit to Lubowa last week where they discovered a low volume of construction works in comparison to the value of promissory notes so far issued by the government.
The minister of health Jane Ruth Aceng at first informed the committee that in a meeting held with the president they had agreed to extend the date for completion of work from 2022 to 2024 due to the challenges the investor had faced.

MPs demanded to know what necessitated the advance payment of 86 million us dollars to the investor which is contrary to the agreement since promissory notes were supposed to act as security to be redeemed after the completion of the project. MPs noted that the investor did not have the financial capacity to construct the hospital but she is only using government finances to run the project.

Attorney general Kiryowa Kiwanuka Kiwanuka informed MPs that under the agreement the investor is allowed to redeem the promissory notes issued to her and it’s not the government’s business to find out what she used them for.

The committee also tasked officials to explain whether the investor has ever received any loan from any bank to construct the hospital. They wondered why the government is incurring interest on the alleged loan obtained by the investor.

The Acting Director of Treasury Services & Asset Management in the Office of the Accountant General Jennifer Bigirwa Muhuruzi informed the committee that their only duty is to issue promissory notes commensurate with the works that have been carried out and make sure they make payments once they are due.

Kiryowa Kiwanuka pleaded with the commitment to clear the proposed budget of Shs319bn for Lubowa and get an expert to audit the values of works at Lubowa Hospital against the Promissory note issued to save the government from possible penalties that can arise from the delays.

Japan gives UNICEF US$1.5 million to improve the tracking of under-immunized and unimmunized children. Funds will be used to implement...