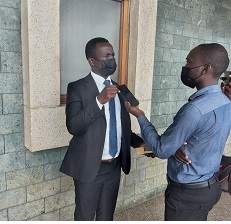 Aruu county Member of Parliament Christopher komakech has called on the ministry of health to deploy psychiatric clinician officers in Pader district.

Komakech brought the attention of parliament to the resurgence of nodding syndrome in the Pader district, quoting the number of suffering children at 600,000 against no single mental health clinical officer.

A psychiatrist is a medical doctor (an M.D. or D.O.) who specializes in mental health.

He appealed to the ministry of health to consider appointing psychiatric officers in the Pader district to manage children who go through the trauma.

Nodding syndrome is a form of epilepsy that occurs in onchocerciasis-endemic areas. It has affected thousands of children in Northern Uganda where the epidemic emerged during the civil war.