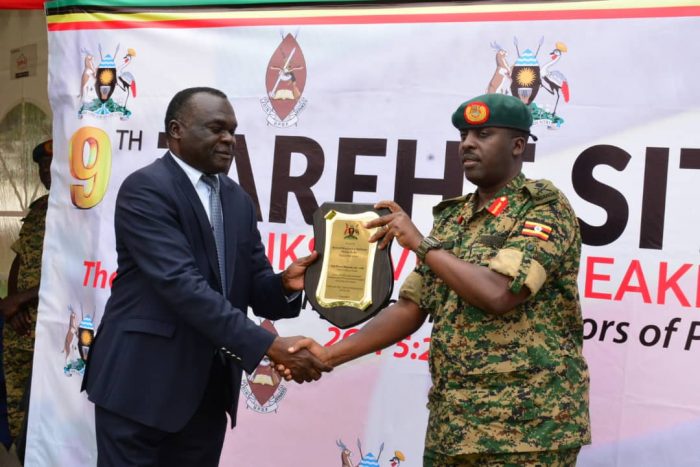 The Deputy Chief Justice His Lordship Alfonse Owiny Dollo has praised the Uganda Peoples’ Defense Forces (UPDF) for being a true professional and disciplined Army that has built and sustained peace and stability both in Uganda and beyond. Justice Owiny Dollo said this as he officiated at the 9th Tarehe Sita Thanksgiving Breakfast held at the Ministry Of Defense and Veteran Affairs headquarters on Mbuya hill in Kampala, under the theme : “Celebrating The Ambassadors of Peace” The theme was retrieved from a Biblical text 2 Cor 5: 20.”

He commended UPDF for exhibiting the spirit of pan-Africanism. He noted that because of the beautiful work from the security forces, peace in Uganda has become a must in all efforts to pacify Africa, adding that UPDF is powerful because they forever seek the kingdom of God before any endeavor to create peace and prosperity. The Deputy Chief Justice further noted that UPDF is composed of a different breed of soldiers; ready to act within the law, respect civilian authorities, propel democracy on top of engaging in activities that project the country to achieve middle income status.

“As a non-partisan, professional, Peoples’ Army; you have been inward looking and collectively submitted to the civilian authority. We are very proud of you,” Justice Owiny Dollo told the Defense fraternity.

“By the will of God, UPDF will continue embracing the democratic process in Uganda, allow exchange of views as well as continue building commanders who know the power of the civilian authority” said Justice Owiny Dollo. He urged UPDF commanders and troops to restrain from hostility and self-identity but rather tolerate nationalistic ideas for the country to be different from past regimes.

The Guest Speaker Rev Fr. Paulino Twesigye Mondo thanked God for helping UPDF achieve its purpose of securing Uganda. He noted that because of the beautiful work from the security forces, peace in Uganda has become a must. “If you love peace, then God invites you in Uganda,” he said, adding that as ambassadors of peace, UPDF has ushered in the fundamental change evidenced by the rapid infrastructural transformation development, rule of law, development in ICT, improved health, among others.  He observed that UPDF has been able to liberate others because it is an ambassador of peace that applies professional and practical skills in order to transform societies. “Existence of Peace promotes wealth creation, enhances creativity brings satisfaction and development, preserves good health, among others,” said Rev Fr. Mondo.

The Minister of State for Defense in Charge of Veteran Affairs Hon Lt Col(Rtd) Dr Bright Rwamirama on behalf of the Minister of Defense and Veteran Affairs Hon Adolf Message said UPDF is built on the foundation of professionalism and discipline. He cautioned troops to maintain discipline while bearing in mind that the average purpose of their work is to create a better country for all Ugandans. “UPDF primarily exists to serve others,” he said.

The Permanent Secretary of the Ministry of Defense and Veteran Affairs Mrs. Rosette Byengoma expressed gratitude to God for enabling the Defense fraternity diligently execute their duties under the stewardship of President Museveni. She remarked that the day is commemorated to celebrate the achievements of our gallant troops both living and dead.

Also at the Thanksgiving Breakfast, the Chief of Defense Forces Gen David Muhoozi, applauded the Lord for giving Uganda a Commander-in-Chief Gen Yoweri Museveni, who has the power and wisdom to build an Army based on the right ideology and commitment to the needs of the population. Gen Muhoozi noted that the thanksgiving commemorates the highlights of defence fraternity. He saluted UPDF spouses for tirelessly working in unison with the troops to create peace and stability in Uganda and beyond. “We are leaders because of what we do with you,” Gen Muhoozi told the congregation.

In his closing prayer, the Commander Land Forces Lt Gen Peter Elwelu prayed for forgiveness and mercy during all UPDF missions and requested the good Lord to continue extending the hand of wisdom to all commanders in the security forces.

During intercession, the Deputy Inspector General of Police, Maj Gen Muzeyi Sabiiti, on behalf of all Security Forces, guided by Peter 1:3 from the Holy Bible, asked God to continue guaranteeing peace and security in the country and region.

At the annual 9th Tarehe Sita Thanks Giving Breakfast, the 1st Reading was taken from Zechariah 3: 1-10 and 2nd Reading from Cor 5: 16-20, while the Moslem faith used Imran 3: 190-200 to praise Allah (God) for the peace and national transformation ushered in Uganda by the Ambassadors of Peace (UPDF).

The function was also attended by the Minister for Kampala Capital City Authority Hon Betty Kamya, UPDF Joint Chief of Staff Lt Gen Joseph Musanyufu, Members of Parliament including those from Acholi Sub –Region that hosted the recently concluded 2019 Tarehe Sita Activities, UPDF Chiefs and Directors, Representatives from Police and Prisons services, veterans, wives of fallen comrades, children of fallen comrades, civic leaders supporters, civilians in the Ministry of Defence and Veteran Affairs, among others.