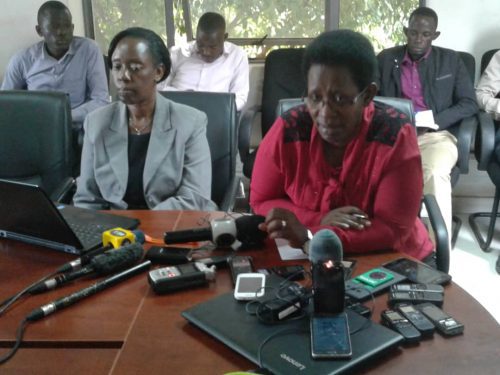 Self referral among Ugandans to various health centers within and abroad the country has been sighted as one of the biggest burden to resource wastage and creation of more health complications.

Addressing a media meeting today in Kampala, the commissioner clinical services ministry of health, Dr. Jackson Amone and the director general health services, Dr. Henry Mwebesa say, though it’s a right for a patient to seek referral to better and faster services, sometimes this rule is being abused by the patients and some health workers in the country.

The health experts say, self referrals have seen many patients use too much money in sometimes wrong medications or even face more health complications which sometimes see some lose their lives.

The experts further says 20% of the referrals abroad are kidney transplants and 30% are neural surgeries which necessitate a Ugandan to part with not less than USD.40,000 compared to USD.5000 when treated from Uganda.

Dr. Amone continues to state that all that is needed to offer these kind of specialized services or treatment in Uganda is already in place but the only problem lies with insufficient knowledge among Ugandans that local doctors have the capacity to handle such case.

Now, the permanent secretary ministry of health, Dr. Diana Atwine says, they are in the process of rehabilitating all regional and national referral hospitals as well as re-equipping them to enable them offer the required medical services as one of the means to reduce on and streamline the national health referral system. “No regional or national referral facility will again be treating simple cases like, fever, flue, skin rush among other simple illness.” Says Atwine.

For a patient to be referred, they need to have a letter from a specialized medical officer indicating in detail why the referral at a time.

Now the ministry is soon coming up with a final national health referral policy and guidelines which will then be fully followed by Uganda.

The director general health services, Dr. Henry Mwebesa and the under secretary ministry of health Ronald Segawa confirm that, within the next year, the rapid ambulance system will be in operation and linked across the country.

The system will be managed by a call center that will be coordinating all the emergencies and directing where to do the pickup and drop of patients.

Over UGX.12bn is need to have the starting phase of the system put in place with over 200 ambulanced needed to kick start the emergency system.

The ambulances according to Dr. Mwebesa will not be affiliated to any hospital as this will help in proper management of the ambulances.

The ambulance emergency system slated to be set up in two phases will start in the districts of Kampala, Wakiso, Mukono, Jinja, Iganga, Mbale, Gulu, Masaka, Fortportal, Arua among other districts and the rest will be added on the system in the second phase.

The ambulance system will have well trained personnel to handle all kind of emergencies as a way to save lives of Ugandans who are in critical condition during the time of transit from one hospital to another.