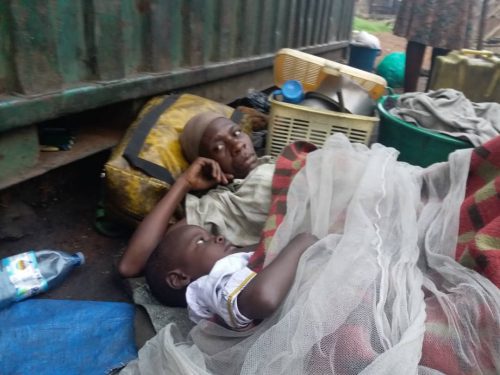 Street mother with her child.

Eight members of parliament under the Uganda parliamentary forum for children have been shocked by the appalling environment in which the street connected children sleep.

More shock befell them while in kisenyi, as they couldn’t believe when they found a street child grown into an adult and now a mother of two sleeping in open space with her two babies. Annet mutooro has told the mps that she has lived on the street for now 26 years. She stays there with her two children.

Annet who did not reveal the father of the children, says, she can only move out in Kisenyi to engage in picking and sorting serials to earn ends meat for herself and her two children.

She paid a minimum of UGX.5000 and a maximum of UGX.7000 a day which she used to cater for her family as well as paying rent.

The mps led by the Uganda Parliamentary Forum for Children secretary Gen Hon Akello Franka, early this week toured the slums of Katwe and Kisenyi led by Dwelling places an organization working to rescue street children.

According to Damon Wamara the country director of dwelling places, the impromptu early morning tour is aimed at exposing the legislators with the real hash environment in which the street children live and work but also to give the mps facts about the need to combat child trafficking and unsafe migration a vice that has increased the number of children on the streets.

The Mps set off at 6am at parliament to kisenyi where they Found street connected children sleeping in open spaces in the morning coldness after a rainy night.

The mps were shocked to find children in kisenyi- kakajo sleeping in polythene bags hung between walls and sleeping in structures made out of rubbish.

“Its very annoying and shocking to see the children of Uganda living like this. I am very touched and i have found one girl with a baby, i am going to arrange and give her a job in one of my schools said Hon. Mbwatekamwa”.

Hon Frank Akello, it’s appalling that children bare such a life situation. “Parents out there if you know that your child is on the street please work with Dwelling places and get them away, the situation is terrible.” Says Hon. Akello.

The mps also landed on a shelter run by landlords where street children sleep but each pays between UGX.500-2000 depending on age. The women told mps.

Dwelling places country director Damon Wamara explained to mps that such shelters are being used by Children traffickers who pay the landlords and later subject every child to go to the street to beg with a target of not less than UGX.20,000 a day.

This is unacceptable and we can’t just look on as Dwelling Places a child rights NGO. I want to urge our mps and all Ugandans to take responsibility and in an organised was ensure that children are off the streets and the traffickers apprehended.

In katwe the mps toured the filthy kikaramoja settlement where most karamajong street children live and the situation is appalling.

During the dialogue with mps after the field visit, the mps one after the other committed to do all they can within their means to combat child trafficking and unsafe migration.

Hon waira Majegere said that there is need to amend the laws on trafficking to tighten the punishments.

Hon Waluswanka challenged the police to intensify it operations and investigation to apprehend perpetrators of child trafficking and unsafe migrations because this vice has increased the numbers of children on the streets.