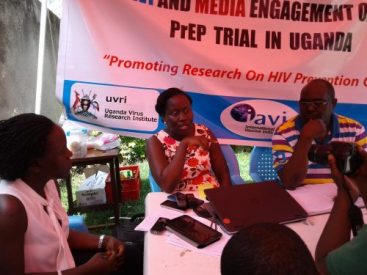 Starting next week, the researchers at the Uganda Virus Research Institute (UVRI) are to kick off with the screening women who are to take part in the HIV/AIDS injectable (Carbotegravir)

According to the clinician on the UVRI research team, Dr. Amanda Wanyana, the carbotegravir injectable is studied with the aim of coming up with another option to the prevention and treatment of HIV/AIDS to affected persons alongside the existing capsules (Truvada) swallowed by HIV negative persons.

She further says, the study will see the selected women swallow tablets and after two month receive the injection which will be administered after every two months with others taking Tablets only.

The formula is geared towards finding out the reaction of the injectable to human being as compared to the current drugs used for the prevention and treatment.Cue.Amanda.Eng&Lug.

However, the research community engagement officer, Getrude Nanyonjo notes, pregnant women, those with chronic illnesses, breastfeeding mothers, women with no convulsion and must be aged between 18 to 45 among other health complications will not be eligible for the study.

She also adds that women who will accept to be part of the study will be insured in case any health complication arises, then UVRI will take full responsibility.

Some of the research site UVRI has mapped out include, landing sites of Kasenyi, Kigungu, Kalangala islands and others in Mukono.

Interested women in the mentioned areas are urged to take part of the study that is geared at having a new HIV/AIDS easy treatment choice for people.

Uganda, Kenya, Malawi, Zimbabwe, S.Africa, Botswana are some of the countries on the African continent where the research is to be carried out targeting 3200 women in 21 sites.

The purpose of the study is to evaluate the safety and ethicacy of the injectable compared to truvada for PREP in HIV un infected women.