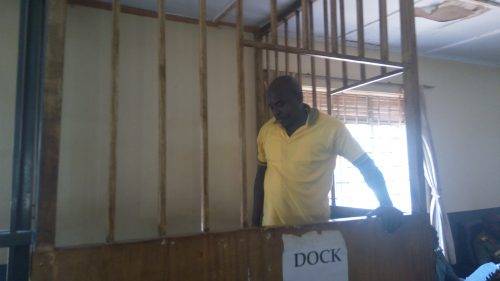 Kitatta limps after dismissal of his bail application

The general court martial for the second time has dismissed the bail application filed by the Boda boda 2010 patron Abudallah Kitatta claiming he has influence to interfere with the evidence against .

In his ruling the chairperson of the General court martial Lt.Gen. Andrew Gutti noted that the court found out That offenses levied against Kitatta are capital in nature yet the applicant is a prominent and an influential person likely to interfere with evidence. The court was also not convinced with Kitatta’s deteriorating health without medical proof from the doctor of the detention facility thus dismissing his bail application

The ruling broke down the hope and spirit of Faridah Nakyanzi, Kitatta’s first wife bust into tears at the military court as he narrated the pain she goes through with her children as their sole bread winner Kitatta whom she has been with in marriage for 22 years rots in military barracks prison. She wondered why Kitatta who was a subject to Kayihura remains in incarceration as his master enjoys bail freedom.

Kitatta’s Children and siblings also had no kind words for the government which they accused of being unfair to their gallant cadre who served it wholeheartedly and mobilized ,voted during his spell as a chairperson of NRM Lubaga districts.

This was Kitatta’s second bail application filed in September this year by his lawyer sienna Owomugisha after his application was dismissed in July on similar grounds. He cited his Grave illnesses, right to bail, being a sole bread winner, three sureties among other conditions for court to grant him temporary freedom. But the state prosecution led by Captain Samuel Maserejje opposed the bail citing Kitatta’s possibility to interfere with witnesses.

Kitatta is accused of being in possession of equipment that are a monopoly to the armed forces yet he is a civilian. These include head gears, UPDF uniforms , two pistols , AK47 gun and rounds of ammunition .He was arrested from Vine Hotel Wakaliga on January 19 this year and twelve others whom they are jointly charged in the general court Martial. The group’s trial has already started and three witnesses have testified before court. Kitatta was heart broken with court’s pronouncements and left the court limping.