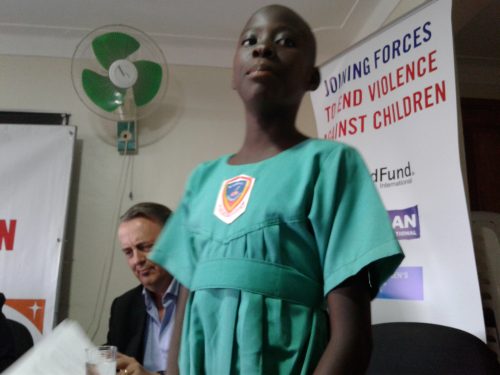 Addressing a joint press conference today in Kampala, the executive director, SOS childrens’ home, Olive Lumonya together with her counterpart from Save the children, Brechtje Van Lith decry the continued acts of sexual, emotional, physical psychological violence mated on the children while at school, saying this continues to affect the growth of children as well as the quality of their studying.

They further mention that a report on violence launched last year shows that 3 in 4 young adults have experienced some kind of violence during childhood and 1 in 3 girls and 1 in 6 boys have experienced sexual violence which now call for aggressive strategies to combat such acts.Cue.Violence.Eng&Lug.

Leah Babule, a pupil at Kamuli girls primary school in Kamuli district who doubles as the school judge says, they are now drawing better pupil to teacher strategies that are geared towards cracking down on violence in schools, among them is the school pupils courts where pupils are taken and read judgments by fellow pupils and later serve simple punishments.

Child rights NGOs are now asking govt to consider implementing the existing anti child violence laws and policies as well as strengthen them to punish all those engaged in the acts.

Uganda among countries like, Philippines, Mexico, El Salvado, Indonesia are having this program being implemented as a way to meet the SDGs.