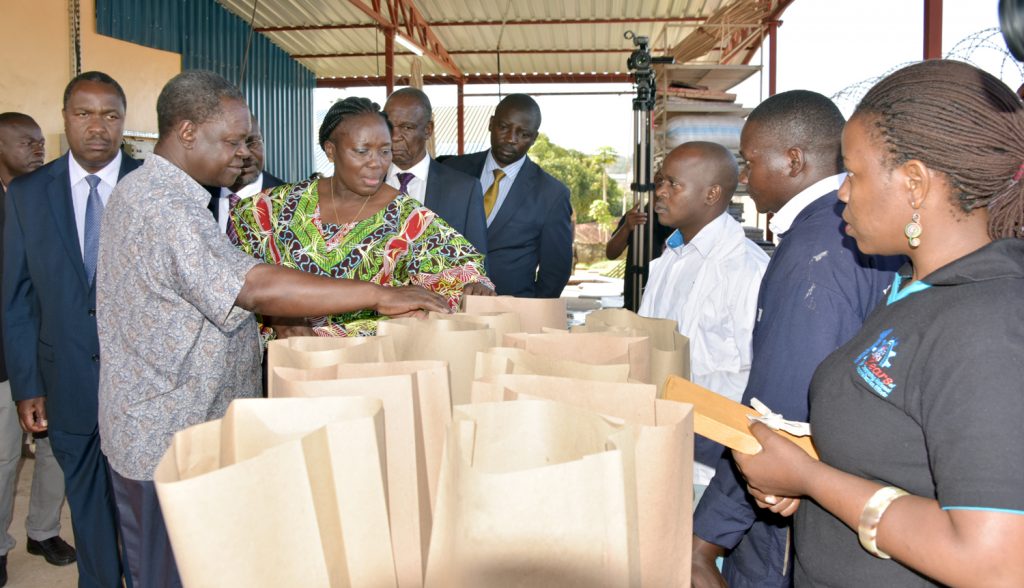 Kadaga commissions paper processing plant
The Rt. Hon. Speaker of Parliament, Rebecca Kadaga, has launched a paper pilot processing plant at the Uganda Industrial Research Institute (UIRI).
While speaking at the launch on Friday, 22nd September 2017, the Speaker said that she was impressed with the work and innovations the Institute had come up with over time.
“My last visit here was five years ago and I must say I’m impressed. Parliament will celebrate this by inviting you to come and talk about your work,” she said, adding that “When I looked at the banana stems, I imagined how much money we can get from making paper from all the stems in the country. It is remarkable to see the use of various organic raw materials to process paper which we as a country have in plenty.”
Kadaga said it is because of the need to spur innovations in the country that Parliament made a resolution to have the Ministry of Science, Technology and Innovation.
“When I was in China, I noticed that every industry I visited had a research department. We need to inject more money and time in research in order to transform from a market-based to a producer-based nation,” she noted.
The Speaker promised to arrange an exhibition at Parliament to showcase to the general population what the researchers at UIRI are doing.
“Let us support these products, let us market more of our products because they are good,” Kadaga said.
The Minister for Science, Technology and Innovation, Hon. Elioda Tumwesigye, was grateful to Parliament for ensuring that a sectoral committee responsible for science and technology was created because it will enable such important institutions.
“We appreciate staff of UIRI for all the work done under meagre resources. There is a lot of technology transfer and research and development. We thank them for their achievements,” Tumwesigye said.
He also noted that government is committed to injecting more money into UIRI, adding that “We got Ushs30 billion of which Ushs10 billion will come to the Institute.”
“The President has asked us to work on existing innovations and convert them into commercial successes. The private sector can take on some of these technology innovations and build on them,” Tumwesigye said.
He said that government is impressed with how UIRI is contributing to the production of products from the banana value chain.
Prof. Charles Kwesiga, the Executive Director, Uganda Industrial Research Institute, said “The Institute has piloted a number of projects and this is just one of them. We have projects in confectionary, machinery, agriculture, among others.”

What happened yesterday at parliament was drama Nankabirwa