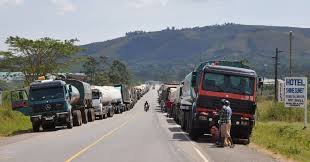 Uganda National Roads Authority (UNRA) is coming up with new regulation to guide sections of road users including users of the weigh bridges, advertising agencies and encroachers in road reserves.

According to the Director Road infrastructure protection at UNRA Reuben Tumwebaze, explains that in the new rules, over loading has been decriminalized, here culprits will not be taken to courts like it has been but will be paying express penalties and those found of involved in committing the same offence continuously, their trucks will have to be confiscated by government .

To the adverting agencies that have been electing bill boards in road reserves, Tumwebaze says these have to be approved by engineers given the calamities theses cause as a result of substandard materials and the information these carry has to first be approved.

He says there has to be order and sanity in usage of billboards citing that many organizations in a given area can use one big bill board instead of scattering many posts.

He says these regulations are to start working in a one week time after launching them.

This at an engagement meeting with different local government leaders discussing how these can work smoothly with UNRA in guiding the locals as UNRA carries out its duties in particular places.

At the same meeting, local leaders including RDCs, councilors, town clerks among others note a number of challenges UNRA has to work upon for the good services to Ugandans.

Speaking on behalf of others, the RCC fore Kampala district Deborah Mbabazi notes lack of flow of information from UNRA as they simply storm an area for particular road construction, delays in compensation of affected people, failure to repair roads on time among others.