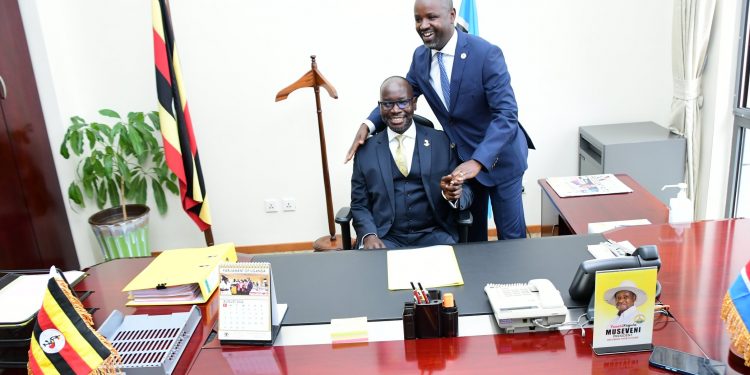 The Deputy Speaker of Parliament Thomas Tayebwa has advised new Government Chief Whip Hamson Obua to adapt own working style for administration of the leader of Government business office.

According to Tayebwa, as Government Chief Whip, Obua doesn’t need to take orders, but do things right.

“you must also use your own style and that is what makes you shine,” Tayebwa said.

Speaking during the handover ceremony on Tuesday morning at Parliament, Tayebwa pledged to accord Obua support in all his work so that he ably delivers on his mandate.

“We are going to give you all the support,” Hon Tayebwa pledged.

Tayebwa urged Obua to pay keen attention to the particular concerns of the various MPs and Ministers he is expected to whip to ardently attend Parliamentary proceedings.

In the same vein, the Prime Minister Robbinah Nabbanja expressed confidence about the incoming Government chief Whip stating that Mr Obua’s team has the ability to perform on the new role he now shoulders.

“It is my absolute belief and conviction that they are a formidable team that is ready to drive the government legislative agenda in Parliament to another level,” Nabbanja said.

In addition to the support pledged by the Deputy Speaker, the Prime Minister Nabbanja also notified that her office would avail the necessary support that will enable government realize their set targets.

Already government is expected to take lead in the processing of the 62 Bills that President Museveni outlined during the State of the Nation Address delivered at Kololo over a month ago.

As he took over the mantle, Obua vowed that he would institute and lead a result-oriented team.

He added: “I will not allow anyone to push me to a side I don’t belong.”

The office of the Government Chief whip was vacant after Rt. Hon. Thomas Tayebwa was elected as the Deputy Speaker to replace Rt Hon. Anita Among who has since been elected as Speaker of Parliament.