What could the Spice Girls reunion mean? 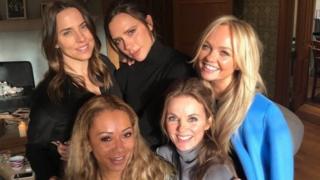 The Spice Girls revealed this weekend they were “talking about opportunities” that may come their way in 2018.
Victoria Beckham, Geri Horner, Emma Bunton, Melanie Brown, Melanie Chisholm (and former manager Simon Fuller) were pictured together on Friday.
The last time they were all together was in 2012, when they performed at the London Olympics and then went on tour.
Victoria ruled out singing again last year and Emma said they needed “another sit down” before the plans took shape.
Speaking on Heart London on Monday, Emma wouldn’t confirm whether there would be a tour or new album.
She cryptically said there was a need for “a bit of girl power in the world”.
This was echoed by Mel C, who spoke to Dermot O’Leary on the Radio 2 Saturday Breakfast Show saying “opportunities and ideas” were being discussed but “nothing set in stone”.
The Sun has reported that the band members could be in line for £10m each and are considering TV shows, endorsement deals and a compilation album.
Seeing as they haven’t confirmed what reuniting actually involves, we’ve put together 10 possible options.
DISCLAIMER: None of these are real, but we fully expect a sizeable payout if they ever materialise.

School Owners Call For One Rregitration and Licensing Center