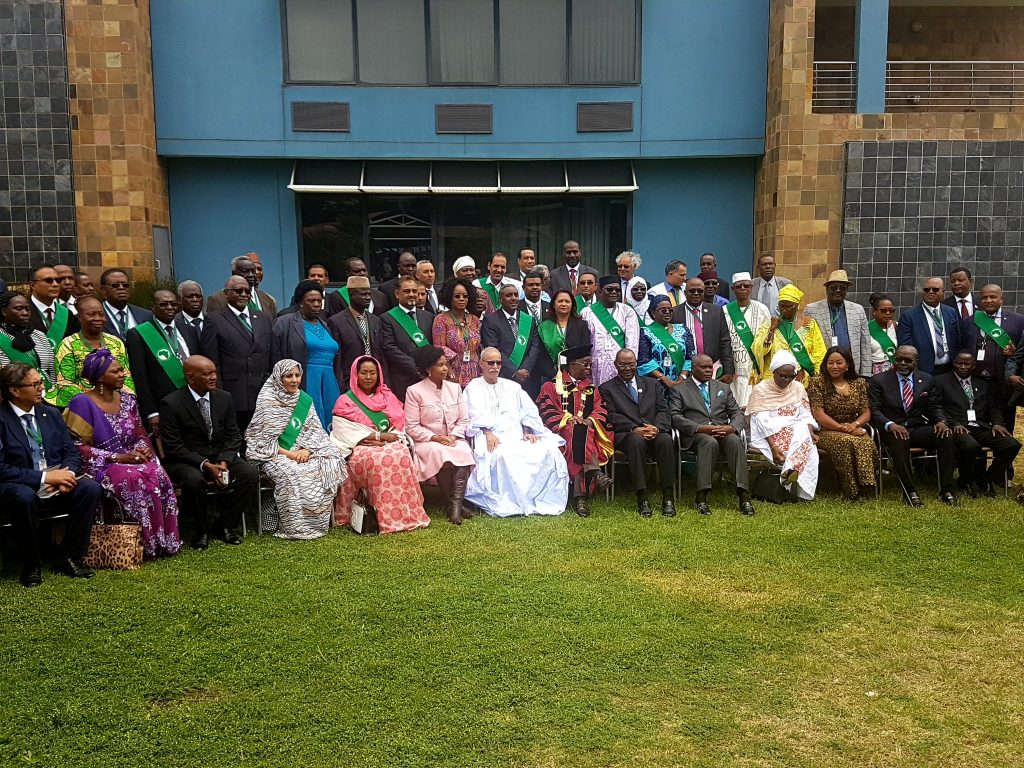 MIDRAND, SOUTH AFRICA: African Legislators are concerned that given the slow pace of ratification of the Malabo Protocol, the Pan African Parliament might never acquire full legislative authority and only remain as an advisory organ. With only five ratifications since its adoption in 2014, out of 28 ratifications needed for the Protocol to come into force, legislators say states are reluctant to endorse the protocol in its current form.
Benin, Guinea Bissau, Kenya, Mauritania and Sierra Leone are the only countries that have ratified the Protocol, which was adopted by the African Union Assembly in Malabo, Equatorial Guinea. Ratification is a sovereign act by a state to submit to an international text.
While debating the activity report of the Pan African Parliament on Tuesday, 10 October 2017, in Midrand, South Africa, the legislators suggested revising the Protocol again and removing parts considered unpalatable to nation states. The current Malabo Protocol is a revision of the original Protocol of 2001.
The Malabo Protocol provides for the election of MPs to the continental assembly from outside the membership of national parliaments. It also provides for representation of two women out of five designated members per country. Currently, the PAP is only a consultative and advisory organ, but the Protocol seeks to give it full legislative authority to make laws for the continent.
“In our own countries Parliaments are suppressed. Can you imagine a Parliament that doesn’t belong to you legislating for you? It will not happen in Africa,” Prof. Ogenga Latigo said.
According to Prof. Latigo, prior to the development of the Protocol, there ought to have been consensus generated from all the countries as to what the countries aspired for PAP to be.
“Protocols are normally done in offices and Presidents just come and sign,” he said. Latigo proposed that PAP should instead debate and pass resolutions on specific issues that they see as contentious in the Protocol and forward it to the Heads of State so that it is amended.
Chief Fortune Charumbira (Zimbabwe) concurs that African presidents are unwilling to cede legislative authority to a foreign Parliament and suggests reviewing the advocacy strategy on ratification of the Protocol.
“The strategy isn’t effective and countries are not happy with some aspects of the Protocol. I suggest amending it so it takes everybody on board,” he recommended.
Sidia Jatta (The Gambia) argues that it is not only ratification where the problem lies but implementation of the protocols too. He said many protocols have been ratified and then shelved. He proposed that questions should be raised and directed to the Executive so they are put to task to explain why they haven’t ratified the Protocol.
In a bid to mount more pressure to their states to ratify the Protocol, Nyiko Shivambu (South Africa), suggested that positions of leadership of the Assembly, such as that of President, Vice Presidents and Committee Chairpersons be ring fenced for those countries that have ratified the Protocol.
He also added that since PAP doesn’t have legislative powers, the Assembly could as well be referred to as the Pan African Forum until such a time that it gets the requisite ratifications for it to have full legislative authority.
The Pan African Parliament has set 31st December 2017 as the deadline for nation states to ratify the Malabo Protocol.
The Fifth Ordinary Session of the Pan African Parliament is taking place in Midrand, South Africa from 9-20 October 2017 and will discuss Africa and EU relations; debate reports of the African Peer Review Mechanism (APRM) for Chad, Djibouti and Senegal. The PAP will also discuss peace and security in Africa and the need to accommodate peace building and peacemaking in conflict prevention and resolution in Africa among other issues.
Uganda’s Members to PAP include: Hon. Jacquiline Amongin (NRM, Ngora); Prof. Ogenga Latigo (FDC, Agago North); Hon. Anifa Bangirana Kawooya (NRM, Ssembabule); Hon. Felix Okot Ogong (NRM, Dokolo South) and Hon. Babirye Kadogo (Ind. Buyende).