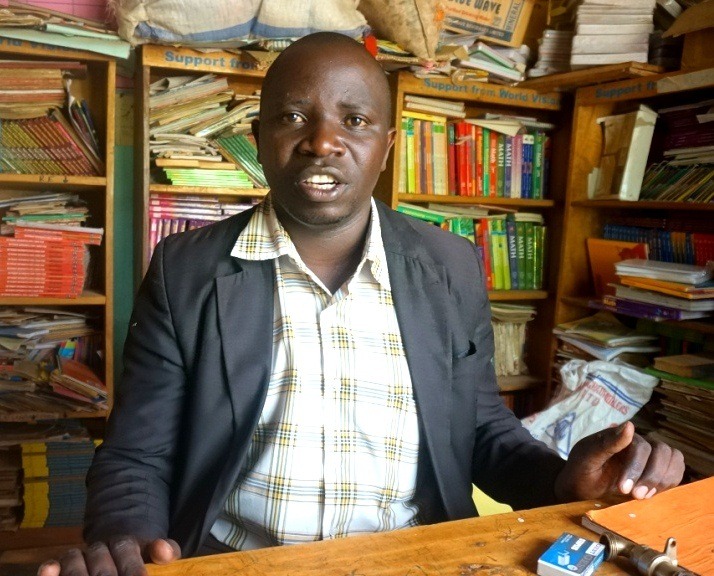 Both pupils and teachers are desperately struggling to cope with the dilemma.

Pupils in these schools have lessons under trees only when the weather permits. Some use makeshift shelters and crumbled buildings.

And the absence of desks has compelled the youngsters to improvise empty sacks, banana fiber, and papyrus mats, timber, tyres, bricks while others sit on bare ground.

They say that enrolment keeps increasing every year but more children are either pulled out of the school or willingly fall out due to the poor study environment.

Moses Baryamutuha, the headmaster, told us that the children and class teachers have to improvise where to sit. He says that the classrooms are always overcrowded due to lack of enough structures.

He says that pupils without desks either stand at the back or sit on mats in front near the chalkboard. Also fighting for space on the few available desks is common which disrupts lessons.

“At least every class can have three streams. I kindly ask the government to help build for us more structures and supply enough desks or connect us with potential NGOs that can respond to our need,” he notes.

According to Baryamutuha, there was a plan to build a three-classroom block for the school last year but the funds were channeled to build another school in Kacheera sub-county.

In addition, the school has written to World Vision for support since they sponsor some children in this school.

Jennipher Nakyanzi, the Class teacher of Baby and Middle class, says they improvise mats for the children. She adds that it’s difficult to control the babies from dirtying themselves because the floor is not cemented.

Due to lack of desks, Nakyanzi says the children’s books are always untidy and dirty. She adds that sometimes children fall asleep in class and lay flat on bare ground. “This situation leads to poor performance and bad taste for education among children,” she adds.

Agnes Nabukenya, the P.1 class teacher said the available two desks accommodate 8 pupils each on the first come first serve basis. This is the only class with a cemented floor. Therefore the rest sit on the floor.

As a result, she adds, complaints about congestion, quarrels and fighting over space on one desk are inevitable.

The headteacher Amon Mugisha says the whole school population has only 38 desks for 212 pupils, and 500 pupils lack where to sit.

“We lack 150 desks to accommodate the 500 pupils who sit on the uncemented floor yet the enrollment keeps growing. Therefore pupils have to bear with the situation because the school lacks funds to provide desks,” he says.

He further adds the staffroom has no seats at all. However, the teachers are forced to share desks with pupils, something that inconveniences them and the pupils.

Justus Gumisiriza, the P7 class teacher, says that they have 10 desks, and each accommodates five or six pupils. When the desks are occupied, the unlucky candidates sit on the floor, on their mats or sweaters.

He further argues that lack of desks leads to poor sitting posture hence poor handwriting which leads to poor marking. “In most cases, the learners do not concentrate at all and teachers have to spend a lot of time in class control which irritates both parties.

According to Gumisiriza, the crisis has created a negative perception towards the UPE schools since the learners compare with some private schools that are doing quite well.

“I was embarrassed when pupil, who joined us from a private school, said that studying in Kayonza p/s ‘felt like a prison’ which actually is, to them,” he says.

Meanwhile, as they wait for government’s intervention, the school management committee chaired by David Gumisiriza and the Parents Teachers Association (PTA) has agreed to cut several trees in the school compound to get timber that will be used to make desks.

Although it may affect the school environment, Benon Kayima, the PTA chairperson, argues that they could not watch the children suffering without desks.

In Kisomole, Lwenkakala, and Kibinda (Byakabanda), the majority of pupils sit on the ground due to a few desks. A few desks are used by teachers and lucky children.

Also, St. Lucia-Lwanga p/s (Kacheera) plus Kirangira and St. Jude-Nalubaale primary schools (Kagamba), lack enough classrooms and the existing buildings are on their last leg. There are very few permanent and complete classrooms but the majority are incomplete. They lack plastering, cemented floor, doors and windows.

In St. Lucia-Lwanga, desks and classrooms are a combined challenge. The school has 572 pupils including 314 girls and 258 boys.

But a considerable number of pupils study under tree shades or temporary structures that have no roof. While other classes lack enough desks, P.3 and P.5 have no classroom at all.

According to Livingstone Ssali, the P.5 class teacher, during the rainy season, his pupils are mixed with primary six which causes congestion and interruption of other teachers’ lessons.

“A classroom helps children to focus. But when we study under the tree shade, pupils are distracted by different things,” he says.

Deo Musuuza, the Headmaster, explains that they have written several proposals to the district education department and the ministry of education and sports to intervene but all in vain.

Kirangira p/s which has 800 pupils has few classrooms. A block housing baby class, P.3, P.4 and P.5 is dilapidated and poses a high risk.

Godfrey Mutaawe, the school headmaster, notes that the classroom block was affected by the September 2016 earthquake which left it cracked and weak. A few weeks later, it collapsed on one side.

Amina Nakato, the P.3 class teacher, says they have raised their concerns about the classroom and desk situation to the school administrators but their hands are also tied. “Yes it is risky to study in such a building but what can we do? There aren’t enough classrooms,” she complains.

Here, the children are living in danger at school. For one time in bad weather, the building that houses accommodates P.4 and P.5 may completely collapse on the children perhaps teachers.

Gerazio Ssonko, the headmaster, says they are forced to mix P.4 and P5 pupils with other classes especially in rainy season fearing the building may fall.

Apart from the desk crisis, the schools have no staff houses thus propelling chronic absenteeism and late coming among teachers.

“At least 2 in every five pupils here have jiggers. Although they come as a result of poor hygiene, lack of shoes worsens the situation,” a teacher adds.

Benon Ssenjumba, the Senior Education Officer-Rakai, confirmed the crisis saying historically Rakai has never had adequate school facilities adding that it is worse in the hard to reach communities.

Ssenjumba, also the Inspector of Schools for Kagamba, Lwamaggwa and Kacheera sub-counties, says that they get shs200M as school Facilitation Grant which cannot enable them to build enough classrooms and buy desks. “We can only manage to construct pit latrines as per the procurement guidelines,” he says.

However, the Ministry of Education and Sports, through Global Primary Education, a World Bank Programme, has built four schools to address the classroom crisis.

They include Kyabiwa p/s and Kyabubambula p/s in Kibanda plus Kabashambo p/s in Kyarulangira and Kabusota p/s in Lwamaggwa s/c. he says that the schools may be completed in April and handed over to the district.

“Without government and NGOs interventions to address the pending concerns about the desk and classroom crisis, the UPE programme may completely crumble,” he notes.

Robert Benon Mugabi, the LC5 Chairperson, says they are trying to use the meager resources to help schools where necessary. “We want to do a lot but the funds do not permit us,” he adds.

However, World Vision and Cotton on Foundation has also responded by building several classrooms in addition to desks and textbooks which are not enough for the increasing population.

“I can’t blame them because there have nothing to do. As a female students’ leader children have always complained to me hoping I can do something yet I am not in a position to help,” she explains.

Mahad Yiga (P.6), the head boy of the same school, notes that always tired children sleep on dirty floors yet it would have been better if there were desks.

He adds that some private schools in the community are better off with few pupils with enough desks.