the Lady Cranes played against the Makis during the 2019 Rugby Africa Women’s Cup, a qualifier for the 2021 Women’s Rugby World Cup. In an evenly matched  game, Uganda and Madagascar played to a 15-15 stalemate.

The Makis got off to a bright start against the Lady Cranes, but they failed to convert two penalties in the opening stages of the match.

Madagascar were left to rue those two misses as Uganda opened the scoring through Julie Nandawula’s try and Mary Kyoita converted the penalty to take a 7-0 lead.

However, the Makis managed to score a few minutes before half-time through Fabrina Holiniana’s penalty to ensure that the first-half ended with Uganda leading 7-3.

Madagascar came out firing after the interval as they grabbed their first try through Holiniana, but Kyoita made 10-7 to Uganda with a penalty conversion.

The Makis never lost hope as they responded with a try by Patricia Ravololonirina and Holiniana scored her second penalty to make it 15-10 to Madagascar.

However, Samiya Ayikoru had other ideas as she grabbed a late try for the Lady Cranes, and ultimately the match ended in a 15-15 stalemate. 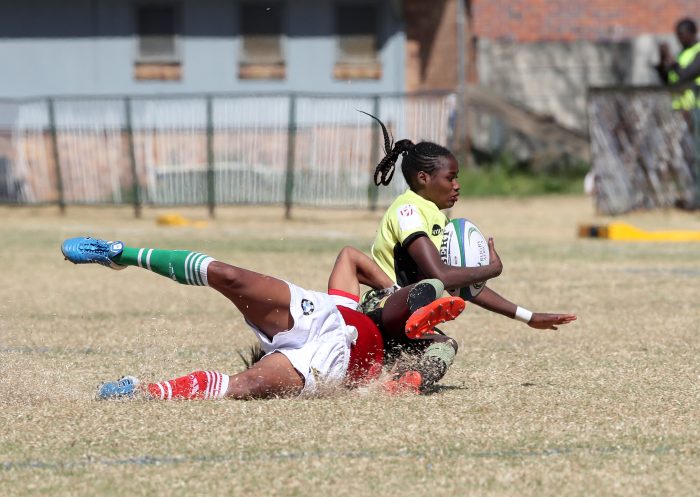 Uganda coach Edgar Lemerigar felt that his charges were selfish on the day, but he believes the Lady Cranes benefitted from competing in the competition.

“The players were selfish on three occasions today. Madagascar were quick, but we tried to stop them. We blame ourselves for this draw,” he said.

“Yes, the players have benefited from this tournament. We have seen some progress in how we play. The last game ended in a draw which means we are on the right path.”

Madagascar coach Ravoavahy Lanto Nirina was pleased to see his side secure a draw in their final match and he also revealed that it was important for the Makis to compete in the international tournament.

“We made some mistakes and we were punished. It was tense throughout the match. We were under pressure in the closing stages of the match, but we held on,” he said.

“It was important for us to compete in this tournament because met international teams. We have been missing that and we have benefitted from participating in the tournament.”

The stalemate saw Uganda and Madagascar end their 2019 Rugby Africa Women’s Cup campaign with an identical records having recorded two defeats and one draw.

The top-ranked team in the group after three rounds of matches will be crowned champions of the 2019 Rugby Africa Women’s Cup and will qualify for the Women’s Rugby World Cup to be held in New Zealand in 2021.

Distributed by APO Group on behalf of Rugby Africa.

“Mafias Want To Kill Me.” Anite

"Mafias Want To Kill Me." Anite