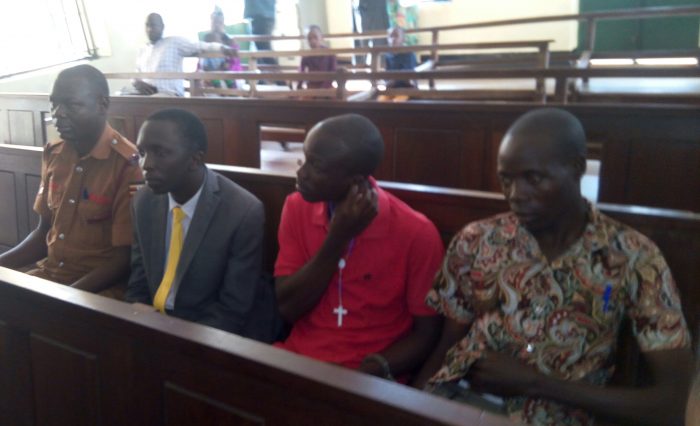 The plea bargain which was sought by the son of the ISO Director general Kaka Bagyenda, Brian Bagyenda in the case of murdering his girl friend Enid Twijukye has flopped today when the prosecution and the defense failed to agree on the terms of the bargain. Bagyenda’s lawyer wants a psychiatric report to be considered in the process.

The Kampala high court was today failed to hear a plea bargain session of a murder case where Brian Bagyenda a son to the Director General of ISO Col Kaka Bagyenda and two others Innocent Bainomugisha and Vincent Rwahaire are accused of murdering Brian’s girlfriend Enid Twijukye on 1st February 2017. But the state prosecution reported to court that the bargain was unsuccessful. The Presiding Judge Anthony Ojok Ayu adjourned the matter to 14th January for a main hearing to start but advised the both parties to continue exploiting avenues of plea bargaining.

Bagyenda’s Lawyer Nsubuga Mubiru noted that they could not proceed with the bargain without a psychiatric report of the accused who he claims was on metal treatment at the time of the incident. He asked court to task police to produce this report as part of evidence. However Nsubuga was  optimistic that by the time the case will resume next year they will have registered remarkable progress with the plea bargaining process.

James Munguriek the lawyer of the other two suspects Innocent Bainomugisha and Vincent Rwahaire also submitted that his clients withdrawn interest in the plea bargain in the middle of the process and asked the state prosecution  to disclose evidence before full hearing starts.

Bagyenda who is a pharmacist and the two co-accused made a request for plea bargaining before Justice Anthony Ojok who is presiding over the criminal session of 40 capital offenders. The state claims that the trio committed the offense at the home of Brian Bagyenda located in Luzira Nakawa division and dumped the body in Namanve forest where it was recovered by police later.