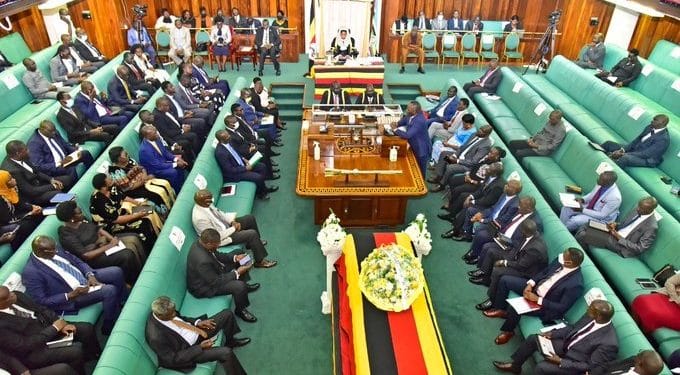 Parliament has paid tribute to Justice Rubby Aweri Opio, the Justice of the Supreme Court who passed on 7 December 2022. Legislators hailed the illustrious career of Justice Opio, having served as a career judicial officer for nearly four decades. Parliament commended his utmost dedication, humility, and commitment.

The body of the fallen Justice Justice Rubby Aweri Opio arrived at the parliament at almost 1 pm, where it was received by the speaker Anita Among. It proceeded to lie in the state from where MPs paid their honor.

At 2 pm the body was assembled in the chambers and a special sitting commenced laying wreaths on the casket in honor of the deceased.

In her communication to the House, Speaker Anita Among described the late Justice as a man of boundless intellect who was selfless and dedicated in his service to the Judiciary.

Prime Minister Robinah Nabbanja who moved the motion to pay tribute to the deceased on behalf of the government described Aweri Opio as a great towering legal mind who served the bench with boundless dedication, utmost humility, and commitment for nearly four decades.

Mathias Mpuuga, the Leader of the Opposition who seconded the motion hailed the late that although Aweri Opio had the opportunity to excel in private practice; he chose public service, which turned out to be of great importance to the nation.

In the sitting that was attended by chief justice Alphonse Owiny Dollo, Several members of Parliament described the deceased as a fountain of humility, hard work, and above also someone who fought corruption.

The House also adopted an amendment to the motion to name a road after Aweri Opio and also set up a modern Library in Lango college school in Lira, the secondary school that the deceased studied.

At the end of the debate, the House adopted the motion to honor Aweri Opio.