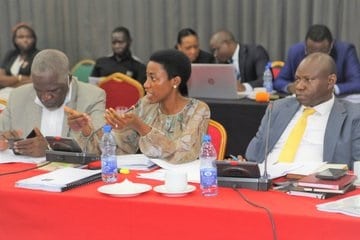 Legislators on the Parliamentary Public Accounts Committee have faulted officials of the Ministry of Energy and Mineral Development over failure to declare Shs53bn that was received under off-budget financing.

The committee members were also irked to discover that the Shs5.4bn which was meant to compensate Project affected persons among other activities was not utilized and swept back to the consolidated fund.

The Committee chaired by the Tororo South MP Fredrick Angura discovered that the ministry received Shs53bn off the budget from development partners but was spent without declaring it to the Treasury to be appropriated by parliament. This according to the auditor general contravenes sections 36, 43, and 44 of the Public Finance Management Act of 2015.

Of the Shs53bn; Shs98.7m was from the United California University to support seismological data collection under DGSM and Shs49.5m for the same purpose. 1.09bn was got from the UNDP Environment facility to support integrated waste management and biogas under the ministry and 21.8bn from the Arab Republic of Egypt for the Solar Powered Plant to be installed in Busitema. The committee is concerned that off-budget financing distorts planning and may result in duplication of activities.

The former permanent secretary of the ministry of energy Emmanuel Mugunga attributed the anomaly to the Memorandum of Understanding signed between the United California University and the Ministry which required funds received by the ministry to be treated as deposits in the ministry’s books, not as revenue that would warrant appropriation. For the case of the 4MW solar plant at Busitema University, officials noted that they received it at the closure of the financial year and it was difficult to request a supplementary budget.

The Public Accounts Committee also questioned ministry officials on how Shs5.4bn was unspent and swept back to the consolidated fund without implementing key activities like compensation of the Project Affected persons. Members noted concerns that a number of people in electricity transmission corridors have not received payment yet since the government took over their land.

The ministry blamed its failure to spend the 5.4bn on covid-19 pandemic and administrative reviews of some procurements.