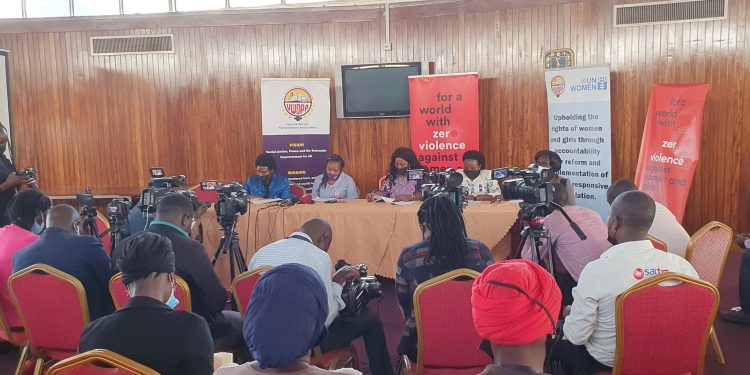 The Uganda Women Parliamentary Association (UWOPA) and Domestic Violence Act coalition are calling for the government to increase financing of gender-based violence prevention and response interventions across all sectors.

During a joint press conference to kick off 16 of the day’s activism campaigns against gender-based violence held at parliament, the Domestic Violence Act Coalition noted that violence against women and girls is at alarming rates.

UWOPA Vice-Chairperson Brenda Nanukenya who also doubles as Luwero woman MP said that Ugandan girls are sexually abused during their childhood and the vice even worsened during the lockdown.

Hon Nabukenya said during the 16 days of activism, the Domestic Violence Act Coalition will engage the communities on various activities with a call for actions by various stakeholders.

“We want the women and men in the public to also be aware of efforts being put in place and also take part in the fight against gender bases violence”, Hon Nabukenya explained.

This year’s national theme is “Orange the world: End violence against women and girls now” just the same as the global theme. The theme highlights the need to break the silence and implore policymakers, parents, religious, and cultural leaders to make homes and communities safe for all specifically for girls and young women, breaking barriers that discriminate against them.

According to the Uganda police report 2020, over 14,000 cases of defilement were reported in 2020 indicating that 20% of the children aged 13-17 had experienced emotional abuse.

Grace Namataaka, program advocacy officer from the center for domestic violence prevention, noted that GBV is high at 59% of females to have experienced violence whether physical, sexual, or emotional.

They say, violence against women and girls deprives them of their right to protection, safety, security, and dignity.

They also urge religious and cultural leaders to speak about preventing gender-based violence.

The Ministry of Gender, Labor, and Social Development, CSOs have lined up several activities starting with a national launch in Oyam district to inform both men and women to be aware of efforts in place in the fight against GBV.

16 days of activism campaign on violence against women and girls was started by activists at the inaugural women’s global leadership institute in 1991 and has since grown into a global campaign.