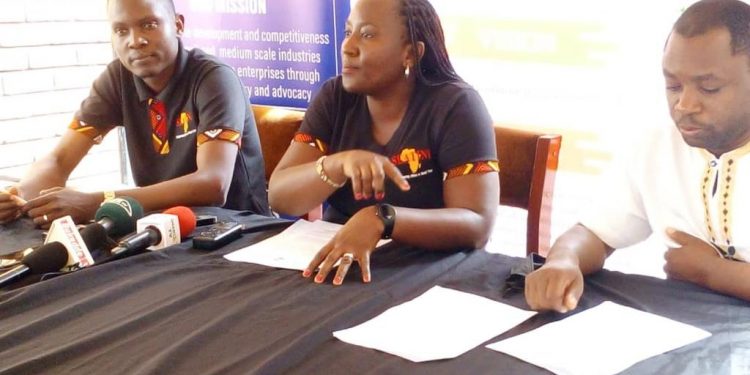 Budget Advocates Speak out  On UGX.200Bn For SMEs

A section of civil society groups has urged the Ministry of Finance and Bank of Uganda to review the conditions attached to the Shs200Bn relief funds meant to cushion Small and Medium-Sized Enterprises (SMEs) from the shock of the pandemic.

It should be recalled that on 23rd November 2021, the Ministry of Finance and Bank of Uganda launched the Shs200Bn Small Business Recovery Fund of which government would allocate Shs100Bn and the other Shs100Bn would be provided by Centenary Bank, Post Bank, Stanbic Bank, and other financial institutions.

While addressing journalists in Bukoto on  John Walugembe, Executive Director, Federation of Small and Medium-sized Enterprises (FSME) called for the review on some of the conditions especially the SMEs bearing the cost of paying insurance fees and legal fees during loan processing as well as collateral that the borrowers will have to produce before getting the loans.

He said there is a need to review the condition that states that the loan facility will be secured by any form of collateral as agreed upon by the Participating Financial Institution in accordance with its lending policy.

He also revealed that despite the Fund launching two weeks back, players in the SMEs sector were shocked to learn that some of the participating lenders were clueless about the said Fund.

The Communications Coordinator, Southern and Eastern Africa Trade Information and Negotiations Institute Uganda (SEATINI), Herbert Kafeero revealed that the Fund will be administered by the Central Bank and businesses employing 5-49 people, with an annual turnover of Shs10m to Shs100m are eligible to apply for the loans at 10% interest.

Kafeero also urged Government to embark on training SMEs in areas of bookkeeping and online marketing in order for small businesses to have an impact, on their operations and recover from the effects of the pandemic.

The  Programme Associate, Women and Economic Justice Joanita Nassuna called for regional balance in terms of implementation of the SMEs Fund saying the initial relief given to Uganda Development Bank (UDB) only benefitted businesses in the central region, leaving those in Northern Uganda struggling to survive.