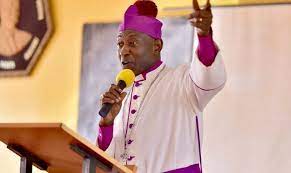 The Archbishop of the Church of Uganda, the Most Rev. Stephen Samuel Kaziimba has eulogized the fallen Speaker of Parliament, Jacob Oulanyah for being very committed and generous.

This is carried in his statement following the death of Oulanyah which was announced on Sunday afternoon by President Yoweri Museveni.

“Oulanyah has been a member of our Church. A not long time ago, he brought 100 million towards Church House debt clearance. He went ahead and mobilized Members of Parliament to do the same and they responded positively. We knew him as a man who wanted a fair and just society, a peacemaker, a champion of dialogue and harmony,” reads part of Archbishop Kaziimba’s statement.

Oulanyah, 56, died at a Seattle hospital in the United States of America- the USA where he was indisposed since February 4th, 2021.

He was referred abroad on February 3rd for specialized healthcare by Doctors at Mulago National Referral Hospital where he was first admitted in January.

He was only elected Speaker of Parliament on 24th May 2021 after winning a hotly contested Speaker’s race with 310 votes against 197 votes garnered by former Speaker of the Tenth Parliament Rebecca Kadaga. Kira Municipality MP Ibrahim Ssemujju Nganda who also took part in the contest managed 15 votes.

Kaziimba says that the Church of Uganda is comforted by its year’s theme derived from Lamentations 3:21, that there is hope beyond affliction. He prayed that the Lord comforts the country in this time of morning a great hero and friend of many.

“We learned of his sickness and we have been praying that God heals him. But again it is God who gives and it’s Him who takes away. There are many questions that are being asked about why God has taken him away at this moment when we needed him most. It is only God who can answer that question,” the Archbishop who is currently on a pastoral visit in Karamoja added.

Meanwhile, Deputy Speaker Anita Among has said that the government had done everything humanly possible to ensure that Speaker Oulanyah receives the required medical care and saves his life.  during a presser at the Parliament.

A cabinet meeting is expected on Monday to further discuss the burial arrangements of the fallen Speaker whose body is still in Seattle, USA.