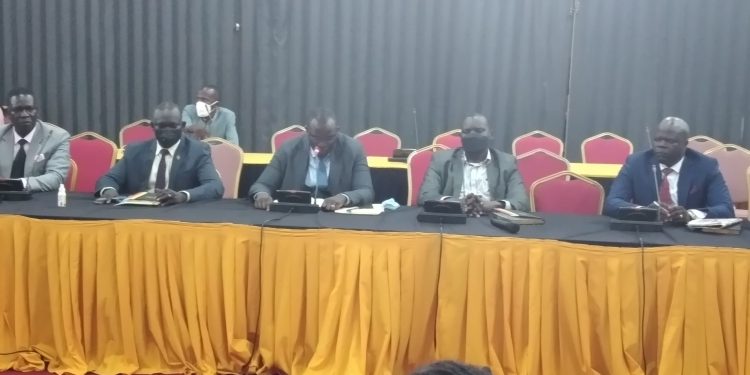 Members of the Greater North Parliamentary Group have threatened to boycott the Speakership by-election if Jacob Oulanyah’s successor is not picked from Greater North.

They claim it was so hard to ascend to this position and they can’t just lose it as a region. They have tasked NRM Central Executive Committee to pick from any of the MPs from the region among those that have expressed interest at NRM today.

Addressing a press at parliament today, members of the greater North parliamentary group including sub-regions of Acholi, Lango, and West Nile have asked the NRM Central Executive Committee to ring-fence the position of the speaker of Parliament for Northern Uganda. They claim they can’t afford to lose their opportunity to serve in the third topmost position of the land.

The four candidates who have expressed interest in the speakership include Arua Central Division MP Jackson Atima Buti , Minister of state for sports Hamson Obua , who also doubles as Ajuri County MP in the Alebtong district, and Felix Okot Ogwang Dokolo south MP and  Jane Ruth Acheng Acero Lira city MP, who is also the minister of health.

The position of Speaker fell vacant after the death of Omoro County MP, Jacob Oulanyah. He died on Sunday from a hospital in Seattle USA, where he had been taken for specialized treatment last month.

Grater North legislators have reminded NRM of the overwhelming support they showered NRM in the 2021 general elections and threatened to withdraw their support should their voices be stampeded.

They have asked CEC to pick one of the Northern MPs who have expressed interest at party headquarters.

The group chaired by the Ora county MP Lawrence Biyika Songa, has vowed to boycott the Friday speakership bi-election should CEC endorse anyone outside their choices.

The Greater North Parliamentary group has also issued a warning to the National committee organizing the sendoff of Jacob Oulanyah against scandalizing his funeral with issues of corruption and embezzlement of funds for funeral activities.

The furious group also wants the committee to include cultural institutions, religious institutions, and local governments in burial arrangements and also cater for cultural affairs.