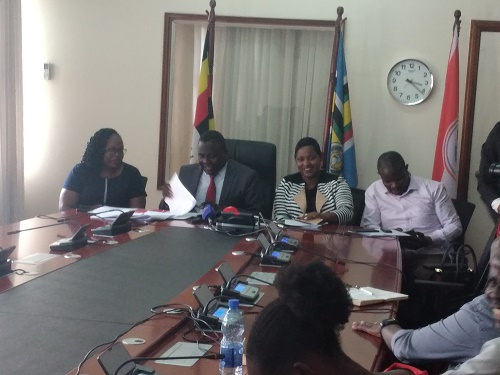 The Shadow Minister of Finance Muhammad Muwanga Kivumbi has raised a red flag over the alleged plot to alter parliament’s resolution and recommendations to terminate the controversial Vinci Coffee Deal.

Kivumbi noted that some individuals want to craft the parliament resolution and provide for review of the agreement instead of termination. But the parliament has dismissed the allegations.

Parliament recently dismissed the controversial coffee agreement signed between the government and Uganda Vinci Coffee Company Limited (UVCC) earlier this year following the report by the Committee f trade chaired by Mwine Mpaka The MPs for Mbarara Division South which recommended termination of the controversial agreement .

MPs overwhelmingly voted for termination of the controversial coffee deal on grounds that it is unconstitutional, illegal , void and unenforceable agreement; and the resolution was adopted to that effect. However, during a press conference today, the shadow minister of finance Muwanga  Kivumbi told disclosed that they have uncovered a plot to have the resolutions and recommendations by the parliament changed by people he didn’t mention.

Muwanga indicated that he has written to the Clerk to Parliament to furnish him with the resolution of Parliament in regards the 18, May debate that saw the controversial coffee deal terminated.

Muwanga emphasized that that such a scheme of changing parliament resolutions  has been ongoing, noting that it is high time those behind it are busted, quoting other cases.

However the Parliament’s deputy director Communications and Public Affairs David Masajjage has dismissed allegations by opposition saying the resolution can’t be doctored  when the records are captured in the  Hansard which is the official document of  of parliament.