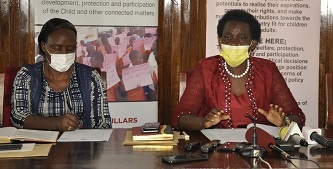 The 10 days which were given to the parliamentary committee of gender to process amendments in the NSSF Amendment bill, 2021 have elapsed with no work done which has frustrated savers.

The committee instead plans to start hearings tomorrow after summoning the ministry of gender labor and social development.

The NSSF amendment Bill of 2021 was re-tabled before parliament on 29TH September following a public uproar from the public. Although the speaker of parliament Jacob Oulanyah directed the committee of gender to fast track the bill and get it done within 10 days, the bill has stalled in the committee and 10 days elapsed with no work done.

The committee sat today and members agreed to use only this week to process the much-awaited bill to grant NSSF savers midterm access to their savings. Kabahenda noted that they are only going to reconsider proposed clauses that the president what to be changed.

The President wants the bill to restrict midterm access to only workers who clock 45 years and have saved for 10 years, He also wants payments of midterm access not to start immediately until guidelines are put in place.  The other contentious matter is on the ministry to house the NSSF as the president wants it in the Ministry of finance contrary to the Ministry of gender where it has been.

However, committee members want to move more proposals in the bill which they feel were not catered for by the 10th parliament which enacted this bill first.

The committee of gender has summoned the ministry of Gender tomorrow to make their case on NSSF amendments.