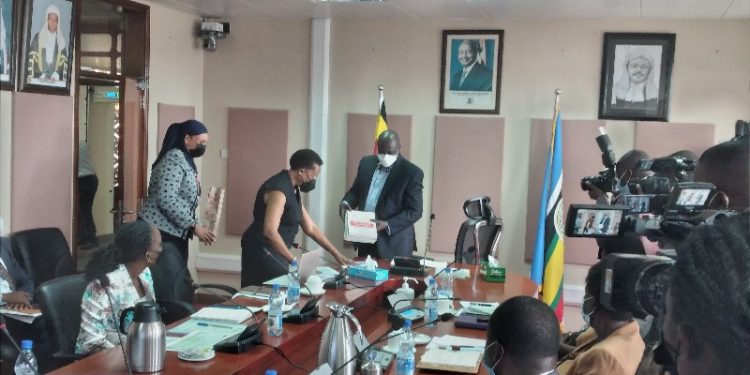 The speaker of parliament Jacob Oulanyah has tasked the Inspector General of Government (IGG) Betti Kamya to clean up her office, before embarking on the fight against corruption.

The IGG was presenting a Corruption survey report to the speaker of parliament which indicates that Uganda Loses over 20 trillion shillings per year in corruption.

According to the Inspector General of Government Betty Kamya, the Inspectorate of government National integrity Survey has discovered that Uganda loses 20 trillion shillings per year in corruption.

The taxpayers’ money is mostly lost in Procurement and Budgeting, Health Care and Education Provision, Taxation, absenteeism in the public sector among other sectors.

Kamya noted  that Studies by most antie corruption agencies such as the world governance index, Africa governance index, Transparency international, Afrobarometer, and others  have consistently listed  Uganda among the countries with a high level of corruption

The IGG is also concerned with Uganda’s widening Corruption Perception index, ranking in 142 out of 180 countries. Uganda also ranks behind three East African Countries in Corruption.

Kamya has thus asked the speaker of parliament to set aside a full day in parliament to debate the cost of corruption to the country in commemoration of this year’s International Corruption Day. She also wants Parliament to establish a Select Committee to Study the IGG Reports and the trend of corruption.

The speaker Oulanyah decried the increased trends of moral disengagement in the society where corruption is justified without shame and condemned superior authorities for fueling graft.

He tasked the IGG to weed out corrupt officials from the Inspectorate of Government who are making the job of fighting corruption very difficult.

Oulanyah has also rashed out at churches to stop blessing the corrupt who offer illicit offertory accumulated from graft.