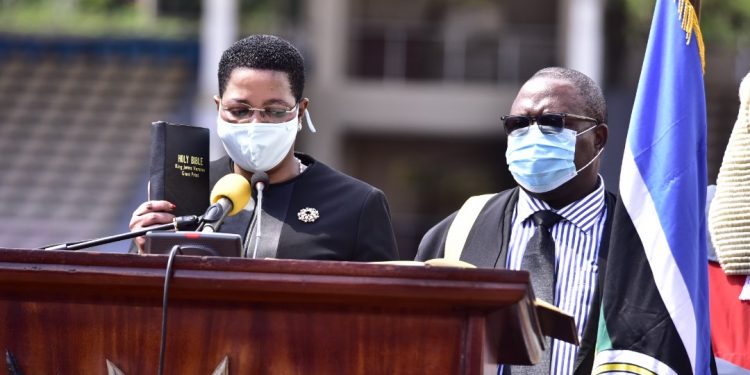 Anita Among has been elected the new speaker of parliament to succeed Rt. Hon Jacob Oulanyah passed away on Sunday in Seattle, USA. Among garnered 401 votes against Asuman Basalirwa who polled 66 votes.

Among becomes the second female speaker of parliament of Uganda after independence and the 11th speaker in the history of the legislature, promised to be a speaker of all and carry on Oulanyah’s legacy?

The Bukedia district woman MP Anita Annet Among has today been declared the speaker of the 11th parliament to replace the fallen speaker Jacob Oulanyah who passed on in the USA on Sunday.

Among, those who were nominated by the Prime Minister, Robinah Nabbanja defeated the opposition joint candidate Asuman Basalirwa nominated by Leader of opposition Mathias Mpuuga in a landslide victory of 401 votes against 66. Only one vote was invalid out of the 468 votes cast at Kololo.

President Yoweri Museveni administered the oath, to the speaker Among and handed her instruments of power including the Mess, Coat of Arms, and the national flag to succeed Oulanyah. Basalirwa conceded defeat and appreciated MPs for their support.

In her victory speech, Among took time to pay tribute to her predecessor and appreciated the president for doing everything possible to save Oulanyah’s life which wasn’t possible. Among hailed Oulanyah for mentoring her in speakership and promised to carry on his legacy.

Among promised factual debates with a focus on common Ugandans to drive the social-economical transformation of the country. She promised to be a speaker for everyone and urged MPs to observe decorum and mutual respect for each other.

Anita Among who was in FDC before joining NRM is an accountant and a lawyer, who has been serving as the deputy speaker, becomes the second female speaker of parliament of Uganda after Rebecca Kadaga who superintended over parliament for 10 years.