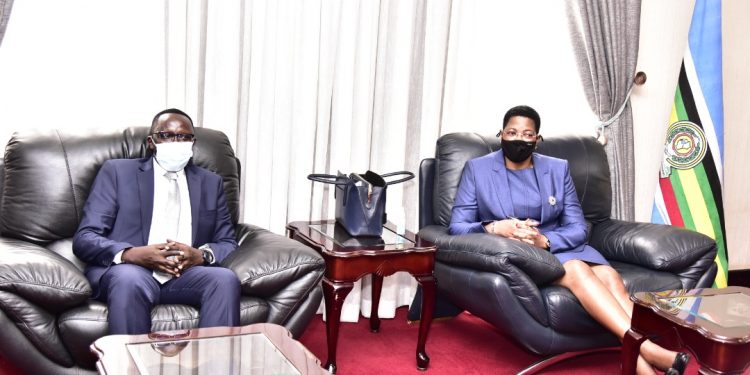 He made remarks after signing Oulanyah’s condolence book at Parliament on 28 March 2022.

The EALA speaker Martin Ngoga together with (EALA) representatives, Hon. George Odongo, Rose Akol, James Kakooza, Mary Mugyenyi, Dennis Namala, and Fred Denis Mukasa Mbide were received by Parliament Speaker, Anita Among and her deputy, Thomas Tayebwa. They paid respects to the late’s portrait before sighing in the condolence book.

In his tribute, Ngoga said he was looking forward to working with Oulanyah as a member of the Speaker’s Bureau of East Africa due to his experience in speakership and legislation.

He hailed Ugandan Parliament for Unique support to the agenda of( EALA) adding that the Assembly has enjoyed a special relationship with Uganda in Oulanyah’s little tenure.

Ngoga congratulated Among and Tayebwa upon their election and pledged to work with them to cement the regional integration.

The speaker Anita Among applauded the (EALA) leadership for their support of the Ugandan Parliament. She eulogized the late and pledged to continue promoting the spirit of togetherness or Ubuntu, something that Oulanyah was passionate about.

Members representing Uganda in EALA have also paid a moving tribute to the fallen speaker and applauded him for domesticating  EALA activities into parliamentary business.

Oulanyah died in Seattle, USA on Sunday, 20 March 2022. Oulanyah’s body is expected to be repatriated this week.