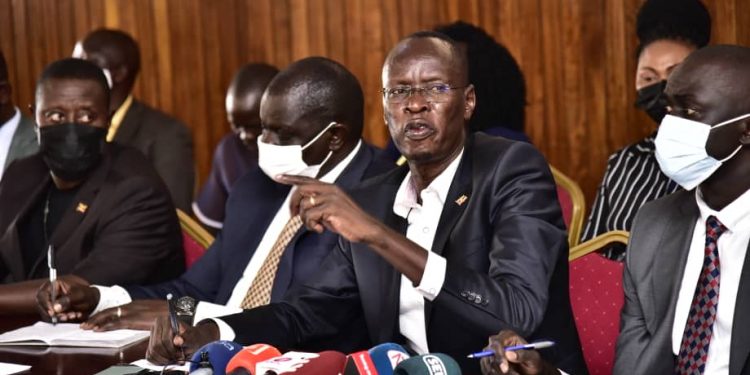 Members of the Karamoja Parliamentary Group have called for a meeting with President Museveni to review the UPDF operation against cattle rustlers in Karamoja, citing gaps in operation.

Karamoja MPs have condemned high-handedness in the operation and asked the government to allow arrow boys to reinforce  UPDF.

During the press briefing at parliament today Remegio Achia the chairperson of the Karamoja Parliamentary group expressed concerns with the way security agencies are running operations in  Karamoja saying they have criminalized the entire region; and attitude has led to the loss of over 3000 citizens and thousands of children into the destitution in the streets or urban centers.

The press briefing followed an earlier statement issued by the UPDF in which Army Spokesperson Felix Kulaigye refuted claims that the security situation had declined.

Kulaigye bragged about the success of UPDF in Karamoja saying that since taking over security of Karamoja in July 2021, 309 warriors have been killed by the army, 184 guns recovered, 2,352 ammunition have been recovered.

However, the Karamoja MPs rubbished the statement by UPDF saying that whereas the Army always wants to paint a picture of success in Karamoja, this isn’t the actual fact.

Now, the Karamoja MPs are demanding the Army admit security shortages and allow the arrow boys to reinforce UPDF.

They also want a meeting with President Museveni over the matter and have an audit into the security situation in Karamoja, which they say has spiraled under the watch of UPDF.