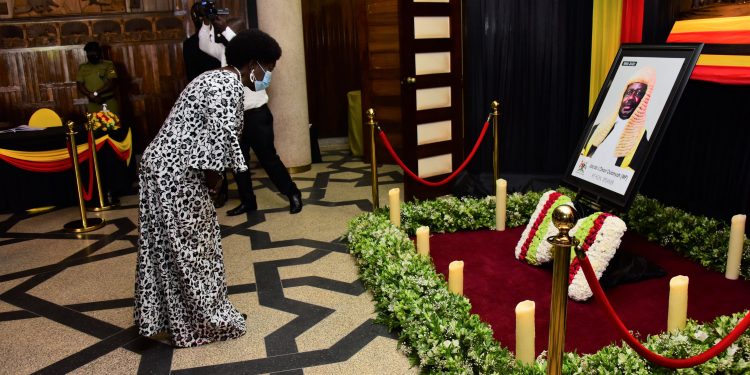 Share on FacebookShare on Twitter
Kadaga Mourns Oulanyah.
Former speaker of parliament Rebecca Alitwala  Kadaga has today paid tribute to the fallen speaker of parliament Jacob Oulanyah who ousted her from the speakership seat in May 2021.
Kadaga signed in Oulanyah’s condolence book and hailed him for his distinguished service and hard work.
At Midday the former Speaker of Parliament Rebecca Kadaga who now serves as a 2nd deputy prime minister and Minister for the East African region Rebecca Alitwala Kadaga made her way to parliament for the first time since she lost the hotly contested speakership elections in May Last year.
Kadaga, who used her private car, went straight to the Lobby and Paid respects to the Fallen Speaker Oulanyah’s portrait before proceeding to tender her message in the condolence book.
The Kamuli district woman representative described Oulanyah as an Nrm cadre who  served beyond mountains and kept the flag of parliament of Uganda high on international stage.
Kadaga recalled the times Oulanyah served as a deputy speaker of parliament under her as memorable. She commended the fallen speaker as a committed hardworking man.
Members of Parliament applauded the former  Speaker Kadaga for divorcing her political rivalry  with the late speaker to commiserate with the country for the great loss.
Meanwhile, Some members of the Parliament commission are concerned with the whopping budget used by the government to run the send-off of the fallen speaker Oulanyah. Solomon Silwany has asked the government to use MPs to carry out some activities voluntarily that are costing the government lots of money.
Previous Post