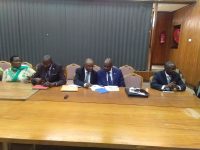 By Damba Rogers
A section of lawmakers from the ruling National Resistance movement 266 in number have resolved to present a private members bill scrapping the age limit cap from the Constitution.
This has been reached at a consultative caucus meeting chaired by workers MP Arinaitwe Rwakajara.
The idea for a private members bill has been fronted by the minister of Defence Adolf Mwesige, who argues that age limit no longer matches with today’s quality of life where the life expectancy is 78 years unlike in 1995 when it was 47.
Jackson Kafuzi, the mp kyaka south constituency moved the motion giving reasons that the older people glow the wiser and more respected they become hence no need to bar any one from contesting because of their age.
She says she dint know the subject matter that was going to be discussed and is opoosed to brnging up the age limit issue before the minimum demands of the public like health , education and infrastructure have not yet been handled as presented in the NRM manifesto.
Meanwhile, the Ssembabule woman Member of Parliament Hanifah Kawooya attacked Amoding for acting in hypocrite manner even when she was briefed before the meeting was convened.
However, the proposal to amend the constitution to lift the age limit has been received with rejection from both opposition and some NRM mps who think the idea is only looked at protecting one person, president Museveni to see him remain in power.
We talked to mps including Nabilah Nagayi sempala kampala woman mp, Muhammad Nsereko for Kampala central, Patrick Nsamba of Kasanda North, Makindye west Allan Ssewanyana among others.
Igara west mp Rapheal Magyezi has been tasked to head the draft of the private members bill and will be seeking leave from parliament for the task any time from now.