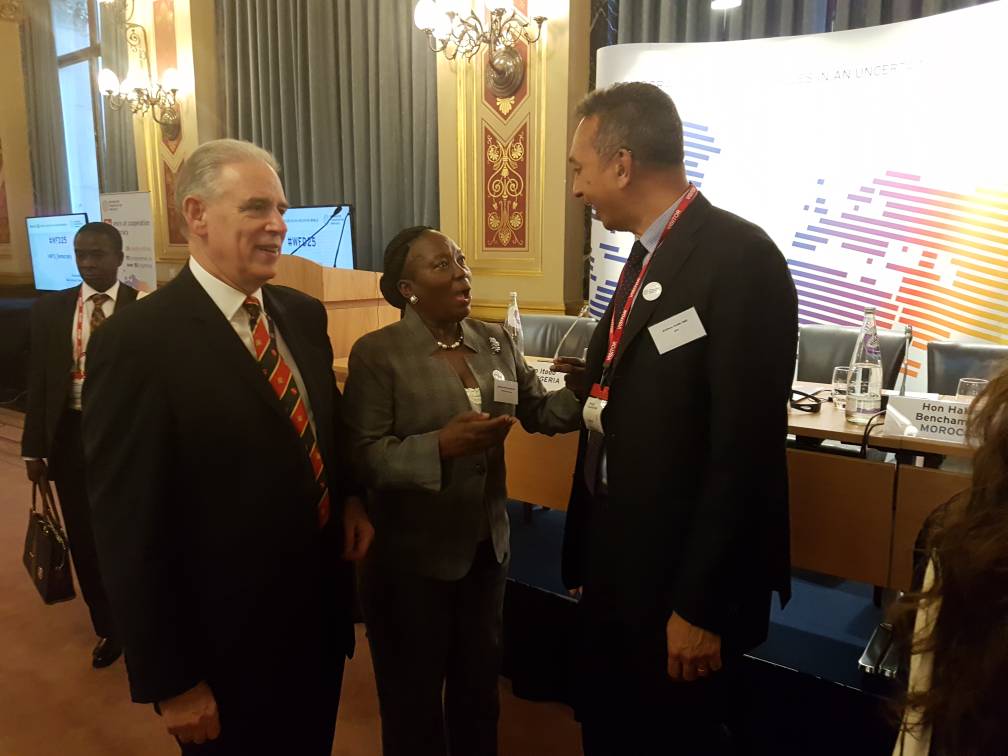 Support Africa to avoid Immigrant deaths in the Mediterranean -Speaker

The Speaker of Ugandan Parliament, Rebeca Kadaga, has urged European nations to push for democratic reforms in Africa, which will lead to economic progress and development to avoid people crossing the Mediterranean Sea to get to Europe to seek greener pastures.

Kadaga said that good political environments translate into development leading to economic opportunities for the citizens of the African countries leading to better standards of living and no need to seek better lives elsewhere.

“Why do we have our children dying on the Mediterranean Sea? It is because democracy has not yet delivered especially on the economic side,” she said.

The Speaker made these remarks at the 25th anniversary celebrations of the Westminster Foundation for Democracy(WFD) on Tuesday, 12th September 2017 in London,United Kingdom.She was a panelist on the topic, “Prosperity and Stability: Why only democracy can deliver”.

Kadaga called on the European states to work towards ensuring that the conditions in Africa are improved to avoid the continuing calamities on the sea as people attempt to reach Europe as immigrants.

“It is in the interest of the United Kingdom and your allies in the European Union to ensure that the economic conditions in Africa are such as would allow the African people to remain in their countries,” she urged.

She called on Europe to ensure that there are substantial investments in Africa to create opportunities and employment.

Over 2,400 people died between January and August 2017 attempting to cross the Mediterranean Sea. 5,143 migrants from different countries of Africa died in 2016.

According to the International Organization for Migration(IOM),the United Nations migration agency, 118,227 migrants have so far entered Europe by sea in 2017 with almost 83 per cent arriving in Italy and the remainder going to Greece, Cyprus and Spain.

The Speaker however, cautioned that respect for human rights by itself does not necessarily guarantee economic success.

Kadaga hailed the women Members of Parliament in the Arab countries for amending and repealing laws that promoted violence against women. She singled out Hon.WafaBani Mustafa from Jordan who pushed for repealing of a section of the penal code that allowed rapists to marry their victims and avoid punishment.

Hon. Mustafa is the Chairperson of the Coalitions of Women MPs from the Arab Countries to Combat Violence Against Women. She said that after Jordan, Iraq and Lebanon have also repealed the same law due to their efforts.

The Westminster Foundation for Democracy is a United Kingdom non-departmental public body set up to promote democratic institutions overseas. It was established in March 1992 and works to achieve sustainable political change in emerging democracies. Parliament of Uganda received support from WFD through the Institute of Parliamentary Studies(IPS).