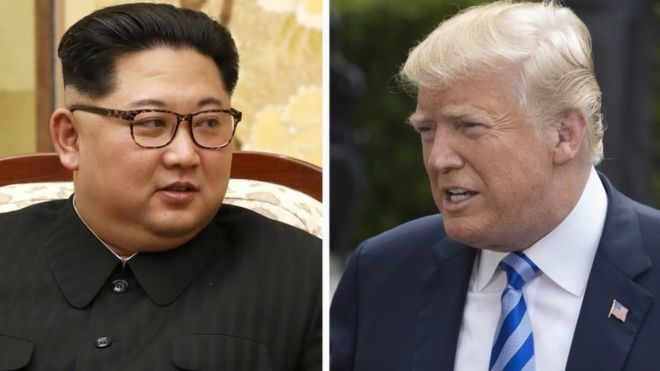 North Korea has said it may pull out of a summit with US President Donald Trump if the US unilaterally insists it gives up nuclear weapons.

The highly anticipated meeting between Mr Trump and North Korea’s Kim Jong-un is due to take place on 12 June.

But in an angry statement, North Korea’s vice-foreign minister accused the US of making reckless statements and of harbouring sinister intentions.

His statement pointed the finger at US National Security Adviser John Bolton.

Mr Bolton has suggested that North Korea could follow a Libyan model of nuclear disarmament, a model many analysts say will have alarmed the North considering the fate of the Libyan leadership.

Kim Kye-gwan said in his statement that this was “not an expression of intention to address the issue through dialogue”.

“It is essentially a manifestation of awfully sinister move to impose on our dignified state the destiny of Libya or Iraq which had been collapsed due to yielding the whole of their countries to big powers.”

“We shed light on the quality of Bolton already in the past, and we do not hide our feeling of repugnance towards him,” he added.

This represents a significant statement from an influential figure in the North Korean hierarchy.

Delicate preparations are still taking place for the Trump-Kim meeting, scheduled for 12 June in Singapore.

The groundbreaking agreement to meet in the first place came about after North Korea said it was committed to denuclearising the Korean peninsula.

Exactly what that would entail has remained unclear, but North Korea has invited foreign media to witness the dismantling of its main nuclear test site later this month.

Mr Kim’s statement on Wednesday, carried by state news agency KCNA, said that if the US “corners us and unilaterally demands we give up nuclear weapons we will no longer have an interest in talks and will have to reconsider whether we will accept the upcoming DPRK-US summit”.

Mr Kim said North Korea “had high hopes that the summit would lead to the easing of the situation on the Korean Peninsula and count as a big step to build a great future”.

“However, it is very unfortunate that the U.S. is provoking us ahead of the summit by spitting out ludicrous statements.”

He warned: “If President Trump follows in the footsteps of his predecessors, he will be recorded as more tragic and unsuccessful president than his predecessors, far from his initial ambition to make unprecedented success.”

Earlier on Wednesday, in a sign of growing difficulties, North Korea pulled out of talks scheduled for the day with South Korea.

Officials were due to meet in the demilitarised zone between the two countries to discuss further details of the agreements they had made at the historic summit last month.

But the North withdrew, angered by the start of large South Korea-US military drills.

The drills – called Max Thunder – had been due to take place around the time of the Winter Olympics in South Korea, but were postponed because of an unexpected thaw in North-South relations.

North Korea had previously said it understood that the drills needed to go ahead.

But KCNA said they were a “provocation” and a rehearsal for an invasion – a return to the sort of language is has used during far more tense times.