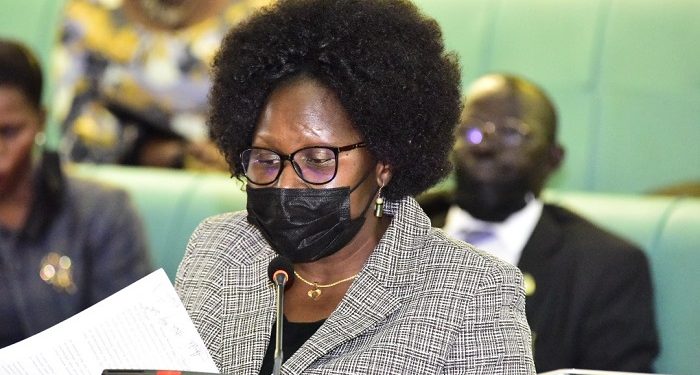 Lawmakers have recommended reducing the age of beneficiaries of the Social Assistance Grant Empowerment (SAGE) from 80 years to 70 years.

This was contained in the report of the Committee on Equal Opportunities on the state of equal opportunities in selected sectors and affirmative actions that was adopted during plenary sitting on 16 August 2022.

The report further recommended affirmative action for women by reducing the age of the beneficiaries of SAGE from 80 years to 65 years.

The Committee Chairperson, Hon. Judith Alyek said that women age faster than men due to hard work as well as effects of childbearing.
“There should be annual increment to the monthly payment of Shs25,000 by at least 10 per cent due to inflation rate. Evidence from the SAGE pilot shows that even such small payment, if made regularly make a huge difference to the lives of poor and vulnerable individuals and families,” Alyek said.

Hon. Hellen Kahunde (NRM, Kiryandongo District) said that the life expectancy of Ugandan women is low and therefore, calls for reduction of age of the SAGE beneficiaries.
“Very few of our people live to celebrate the 80th birthday. If government has resources, they should consider reducing the age,” she said.

Oyam District Woman MP, Hon. Santa Alum said that women can only benefit from the SAGE when the age is lowered.
“When you look for women who are 80 years, you will not find them. If this age could be reduced to 65, many women will benefit,” she said.

The Committee also recommended that the Ministry of Public Service should ensure that every public office should have sign language interpreters arguing that other people with disabilities miss out on services due to communication challenges.

“Government should introduce strategies to ensure that no one is left behind while providing essential services to the community,” read the report in part.

Hon. Alex Ndeezi (NRM, PWDs) welcomed the report but urged the Ministry of Education to expedite construction of special education schools as promised by President Museveni 10 years ago.

“The President promised to construct 10 schools in the 10 original districts but up to now, only two have been constructed. I Implore the Minister of Education to have these schools captured in the budget for next financial year,” he said adding that, ’we have more than one million deaf people and they cannot access public services. This is the time to stand firm and ensure that the Public Service Ministry captures this in the budget framework paper in the next financial year’.

The report also observed that whereas government started the student’s loan scheme to increase access to higher education, there is no regional balance in the awards of the loans, especially for Northern, Eastern and Karamoja with the lowest number of beneficiaries.

“Students loan scheme should be made accessible to all students that intend to borrow the fund for further studies and more information about the loan scheme be given to the public to enable accessibility,” Alyek said.

Hon. Maximus Ochai (NRM, West Budama North County) called for affirmative action in the education grants and bursaries for the needy saying that the students loan scheme presupposes that all can afford to pay it back.
“I propose that we add that grants be given to those from very poor backgrounds as long as they have the capacity and will to study,” Ochai said.

“Information on the loan scheme is limited and yet it reaches the people late. The process should be decentralized. Resident District Commissioners should be given airtime on radio to tell people when to apply,” she said.

“This scheme does not target the rural poor. It should include even arts students, after all it is a loan that will be paid back,” said Itungo.

Chief Opposition Whip, Hon. John Baptist Nambeshe, however, said that the affirmative action programmes of government were not well planned and felt.

“They are designed as token packages but not empowerment. They are highly partisan and that is why they end up being abused,” said Nambeshe.

He also tasked the Minister of Education to provide a list of the beneficiaries of the students loan scheme to enable Parliament ascertain the actual beneficiaries.

The Minister of Gender, Labour and Social Development, Hon. Betty Amongi said that government will assess the financial implication of lowering the age of SAGE beneficiaries.

“We are discussing this and we shall make recommendations to Cabinet. I want to assure you that the affirmative action projects are existent based on clear guidelines. There is no prejudice in respect to access, that is why members have appreciated and made proposals to make sure they are either scaled up or increase in accessibility,” she said