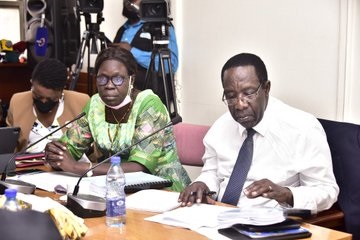 MPs Fear That Roko Is Selling Air To Govt.

Officials from Roko Construction Limited found it a hard time to convince MPs on the committee of finance to approve the proposal by the Government to inject Shs202.13Bn into the company after failing to table before the committee the board resolution that resolved to have government come on board as a shareholder.

MPs discovered that the memorandum of incorporation of ROKO does not allow management to open up the selling of shares to the public.

Members on the parliamentary committee of finance who are scrutinizing the proposal by the government to acquire preferential shares in ROKO worthy Shs202bn, discovered from quoted clauses in the Memorandum of Incorporation Of Roko Construction Limited that barred the current managers to open up selling of shares to the public.

Paul Jacob Batte, Legal Counsel of Roko Construction informed the Committee that the Board Resolution is still in draft form and the new changes to bring in other shareholders haven’t been officially filed with Uganda Registration Service Bureau because Roko was awaiting approval of a tax waiver to a tune of Shs800M in case the Shs202.13Bn is injected into Roko Construction.

His response stemmed suspicion from MPs who wondered how the Ministry of Finance could table before Parliament the motion seeking to buy shares in Roko yet the company’s laws at the moment bar such a move.

More suspicion arose from documents of Roko Construction Company indicated that the company made profits to a tune of Shs790m in 2017, Shs4.4Bn in 2018, Shs2.8Bn in 2019, and a loss of Shs3.3Bn in 2020 and wondered why the company didn’t seek for cheaper funding from Uganda Development Bank (UDB) instead of seeking for funding from Government, yet the shares being proposed to Government don’t give taxpayers any voting rights in the company.

Mark Koehler, Executive Director of Roko Construction Company revealed that currently, the company has projects in the pipeline to a tune of Shs1.2Trn and of these, projects worth Shs700Bn are coming from Government and the Shs202.13Bn will be repaid within 8years.

MPs were also irked to discover that the government is not acquiring ordinary shares but preferential shares which are redeemable after a period of time; a status that doesn’t give the government any voting rights in the company.

According to Roko Construction Company, the Shs202.13Bn financial bailout will help the company retire part of its debt, and invest in some of the projects in the pipeline.