Massive Crowds Rally Across US to Urge Gun Control 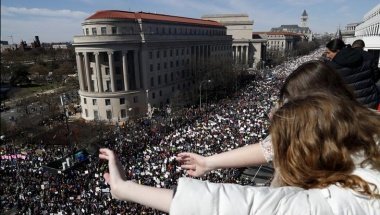 Young girls wave down at marchers from the balcony of the Newseum building as students and gun control advocates hold the "March for Our Lives" event demanding gun control after recent school shootings at a rally in Washington, U.S., March 24, 2018. REUTERS/Leah Millis

WASHINGTON/PARKLAND, Fla. (Reuters) – Tens of thousands of Americans gathered across the country on Saturday at March For Our Lives rallies to demand tighter gun laws, led by survivors of last month’s Florida school massacre which reignited public anger over mass shootings.

Students from the Parkland, Florida, high school where 17 people were killed on Feb. 14 were set to speak at the biggest event, in Washington, where organizers said as many as 500,000 people were expected to demonstrate near the Capitol and call on Congress to fight gun violence.

The protests aim to break a legislative gridlock that has long stymied efforts to increase restrictions on firearms sales in a nation where mass shootings at schools and colleges have become a frighteningly frequent occurrence.

“I don’t want any child to be seen as another statistic,” said Ashley Schlaeger, an 18-year-old freshman at Ohio State University who drove to the Washington rally with friends.

In the Fort Lauderdale suburb of Parkland, thousands of people passed through police checkpoints to assemble in a park for a rally and march. Many held signs with slogans including “Am I Next?” “A Call To Arms For the Safety of Our Sons and Daughters” and “Congress = Killers.”

Adam Buchwald, who survived the mass shooting at Marjory Stoneman Douglas High School, told the crowd he and his friends would stay focused on getting new legislation passed.

“Sadly, this could be repeated in your city or town. This stops now!” he said to loud cheers.

At a rally in New York, a moment of silence was held for the Parkland victims. The accused gunman, 19-year-old former student Nikolas Cruz, faces the death penalty if convicted.

More than 800 demonstrations were set to take place in U.S. cities from Los Angeles to New York and in countries around the world, according to coordinators.

In Sydney, Australia, rally organizer Jennifer Smith told a crowd of about 300 people, many of them Americans, that she could “breathe easy” about sending her children to school in Australia with its tough gun laws.

“I never have to worry about them having to do active shooter drills,” she said.

Organizers of the U.S. marches retweeted photos from sister demonstrations as far afield as Northern Ireland, Mauritius, and Stockholm.

Organizers want the U.S. Congress, many of whose members are up for re-election this year, to ban the sale of assault weapons like the one used in the Florida rampage and to tighten background checks for gun buyers. On the other side of the debate, gun rights advocates cite constitutional guarantees of the right to bear arms.

The teenage U.S. organizers have won kudos and cash from dozens of celebrities, with singer Ariana Grande and “Hamilton” creator Lin-Manuel Miranda among those performing in Washington.

“Trainwreck” star Amy Schumer is set to appear at the Los Angeles rally. Actor George Clooney and his human rights attorney wife, Amal, have donated $500,000 and said they would be at the Washington rally.

Democrats and nonpartisan groups hope to register at least 25,000 first-time voters at the rallies, potentially a boost for Democrats, who generally favor stricter gun controls.

“Keeping our children safe is a top priority of the president’s,” said Walters, noting that on Friday the Justice Department proposed rule changes that would effectively ban “bump stock” devices that let semi-automatic weapons fire like a machine gun.