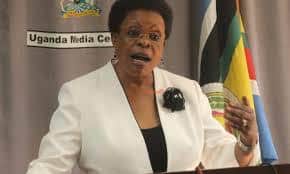 The High court in Kampala has summoned Minister incharge of Kampala Betty Kamya to appear on 24/April/2018 and be crossexamined by the Lord Mayor’s lawyers on why she is allegedly interfering in his work.

Justice Henrietta Wolayo made the order on the request of Erias Lukwago’s lawyer Chrysostom Katumba, but the Judge also advised that between now and 24th. April,   the parties will be called by the court registrar to try and settle the matter,   failure of which it will be heard on its merit.

Last year Kampala Lord Mayor Erias Lukwago dragged to the High court, the Minister for Kampala Beti Tirwomwe, the Executive Director Kampala Capital City Authority Jennifer Musisi, the Attorney General of Government and KCCA, seeking orders compelling the respondents to release his accumulated emoluments and salary arrears for the period of December2013 to May/2016.

The total sum for the 30months Lukwago is demanding stands at 563.4million shillings.

Lukwago also wants court to declare the conduct of the respondents in continuing to freeze his emoluments without justification, as improper in law, and further orders be made in respect to pay him damages for the psychological torture, mental anguish and emotion stress he has suffered.