Conflicting information and change in wording regarding the National Social Security (Amendment) bill has today forced the President to push a major decision on the workers mid-term access to their savings for another two weeks.

“Let us give ourselves two weeks and conclusively solve this matter. I want to be clear with the figures. I am going to do my own research. Let us meet on August 4th,” the President said.

His decision followed a long meeting during which workers representatives including Peter Werik,he, Usher Owere, Charles Bakabulindi and COFTU representative Dr. Sam Lyomoki said while they had agreed with the NSSF that only workers who are 45 years and have saved for ten years (45years and 10 years savings) be allowed mid-term access of 20 percent of their savings, they were shocked to learn that the wording had changed to (45years or 10 years savings).

The meeting was also attended by representatives from the Ministry of Finance led by the Minister Matia Kasaijja, the MD of NSSF Richard Byarugaba members of NOTU and COFTU.

The President said he wants to do more research on the figures after the workers representative said Shs 800bn was needed for the Mid-term access while NSSFs Byarugaba said they may need up to Shs 3trillion shillings.
Mr. Museveni raised various issues including how this will affect workers savings and what happens to the fund.

Prior NSSF MD Byarugaba had said the total fund now stands at Shs 15 trillion and that each worker saves for between 25 – 30 years and earns 150million shillings. He said if they access their savings now, they lose up to 30 million shillings in 20 years. He also said the fund would lose money because it would offer securities at a discount in a fire-sale.

“As long as you can explain to them… that when you take 5 million today, you lose 30 million in 20 years. Also, what happens to the fund..” Museveni asked. He later said he would study the figures before making a decision in two weeks.
Mr. Werikhe who is also the MP for Bubulo West and Secretary General of NOTU said they had agreed to a 20percent access of their 10million savings (Shs 2million).

“When we talked about mid-term, we met with all the stakeholders including NSSF. Workers who have reached 45years and have contributed for ten years are 100,000 that is about 800bn. Parliament instead said 45 or 10. At 45, many people have challenges, Werikhe said.

NSSF is a government agency responsible for the collection, safekeeping, responsible investment and distribution of retirement funds from employees in the private sector who are not covered by the government retirement scheme. 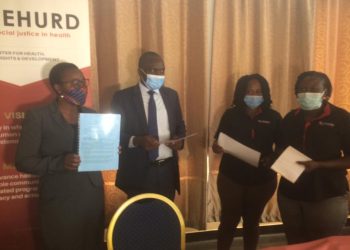