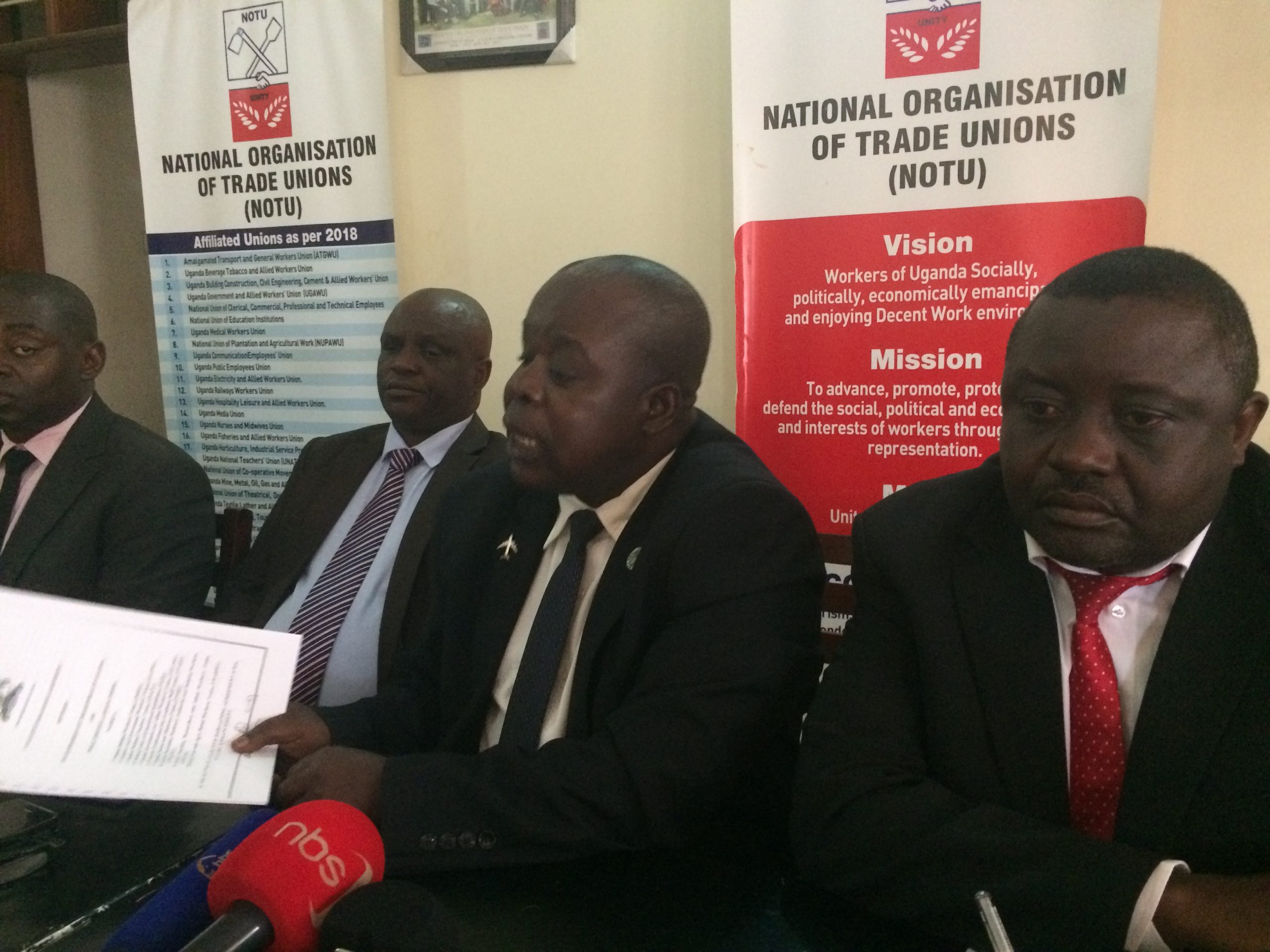 10 government workers’ unions led by the national organization of trade union (NOTU) are giving government only seven days to dialogue with them on the issue of phased salary increment for all civil servants as earlier agreed.

Addressing a joint press conference today in Kampala, the chairman NOTU Wilson Owere and his secretary general Peter Christopher Werikhe are asking government to fulfill its commitment of increasing salaries of all government workers in a phased manner as agreed during the negotiations held way back in 2017.

NOTU officials remind government not to play safe on these matters warning that come May 30th when there is no positive response to the worker’s call, they will definitely stage a nationwide strike.

“We don’t see why government can sign a pact well knowing that there is no money.” Why would people continue talking to government if no positive result is to be realized.

He adds that the mase is fueled by government for failing to fulfill its committements. He further warns government not to antagonize workers since the strike is under the laws of Uganda.

But the secretary general, Uganda national teachers union (UNATU) Philbert Baguma says, they have reminded government about the issues of salary increment for teachers but government seems not to be taking issues serious and as a union, they are kicking off their strike today at midnight.

Baguma now urges parents and guardians to pile pressure on government to meet its obligation adding that failure to meet the obligation, will impact negatively on the quality of services provided to their children.

However, the chairman COFTU Turyareeba Milton, the general secretary Uganda government and allied workers union, Matwire Benon and the secretary general ULGA, Hassan Mudiba question why government continues to disrespect a section of civil servants by paying them less and other are paid highly yet they went to the same schools and hold the same qualification.

“We operate under the same economy, go to the same supermarkets, petrol stations, shops to buy goods and all buy them at the same prices” but the earnings are far different.

He also tasks government to set up a salary commission that will be responsible for setting salaries of all civil servants as this will cure the continued problem of salary disparities among civil servants.

The warn that come 30th may 2019 when the budget is finalized and the issue of salary enhancement is not handled, all civil servants will lay down their tools.

The workers’ ultimatum which was passed on 12th February 2019 ends today and teachers are kicking off with the strike.

Government in 2015 agreed to increase civil servants salaries in two phases with the first phase accommodating health workers and science teachers plus university lecturers, then the second phase was meant to cater for arts teachers, local government workers among other civil servants starting this coming financial year but this seems not to be realized hence the strong warning.