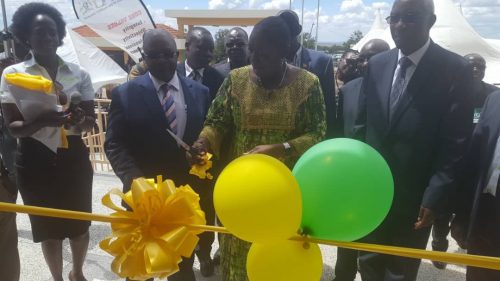 The Speaker of Parliament, Rebecca Kadaga, has appealed to parents in Moroto to educate their children in order for them to favourably compete for job opportunities in the Auditor General’s Office.

Commissioning Auditor General’s Regional Office in Moroto, Kadaga said that with a good education, children from the area will also qualify for better job opportunities throughout the country.

“You have to go to school and work hard so as to be able to take advantage of these job opportunities and compete with other qualified candidates,” she said.
In her comments, Moroto district Woman MP, Hon. Stella Atyang (NRM), had appealed to the Auditor General to employ locals in the Office.
Kadaga said that in order to have more locals employed they need to improve on their education qualifications so as to be competitive.
She commended the Auditor General for reaching out to the people in their different districts.

“As Parliament we supervise the Auditor General’s Office and we depend on each other for success. By opening up different regional offices, the service is brought closer to the people,” she said.
The Auditor General is appointed by the President with the approval of Parliament. The Auditor General audits on the public accounts of Uganda and of all public offices before submitting an annual report of the audited accounts to Parliament.

The Auditor General, John Muwanga, said that the regional office was meant to bring their services closer to the people and enhance service delivery within the Moroto region.

He added that the regional office which was curved out of the Soroti Regional Office will serve Moroto, Nakapiripirit, Kotido, Kaabong, Abim, Amudat and Napak districts.

“Establishment of these offices was intended to reduce the distance between the auditors and the clientele,” said Muwanga adding that “Our presence is well spread throughout the country.”
Moroto is 11th regional office after Masaka, Mbarara, Fort Portal, Arua, Kampala, Soroti, Jinja, Mbale, Hoima and Gulu.