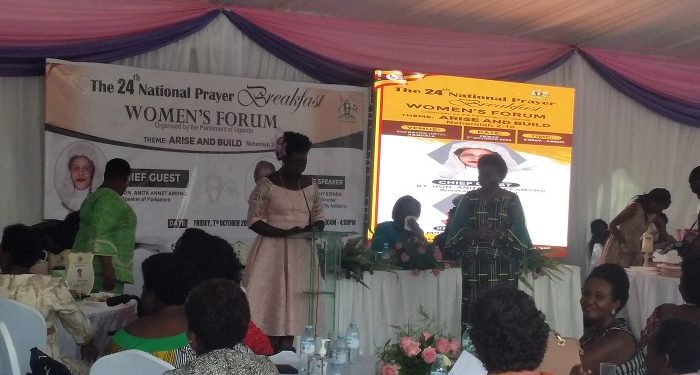 Female Members of Parliament have been cautioned against breaking up with their husbands after ascending to parliament.

The call was made by Justice Catherine Bamugemereire at the Women’s Forum of the National Prayer Breakfast organized by parliament in commemorating the Independence Day.

Women in Positions of leadership have today gathered at Sheraton Hotel in Kampala to participate in the annual Women’s Forum of National Prayer Breakfast of the Organized by the Parliament of Uganda ahead of Independence Day Celebrations.

The Tororo District Woman MP Sarah Opendi who represented the speaker of Parliament Anita Among challenged Women to get out of their comfort zones and go for top political positions  in the country if they want gender related issues affecting women to be addressed.

In her message delivers by Opendi, the speaker Anita Among urged women to arrest there political differences and called for Unity women for national good.

Opendi who also chairs the Uganda Women Parliamentary Association (UWOPA) condemned women who perpetuate domestic violence against their husbands just because they have lost employment.

The Executive Director of Kampala Capital City Authority Dorothy Kisaka  who was the Key note speaker urged women in high positions of leadership to tame their egos and serve God’s people in order to make impact on the society.

Speaking at the event, the court of appeal Judge Catherine Bamugemereire,  invited female members of Parliament to avoid breaking up with their original spouses after ascending to parliament.

The event was climaxed with awards to women that have made outstanding contributions in the country including The first lady Janet Kataha Museveni, Nabagereka of Buganda Sylvia Nagginda, Dr. .Jane Ruth Aceng the Minister of Health among others.