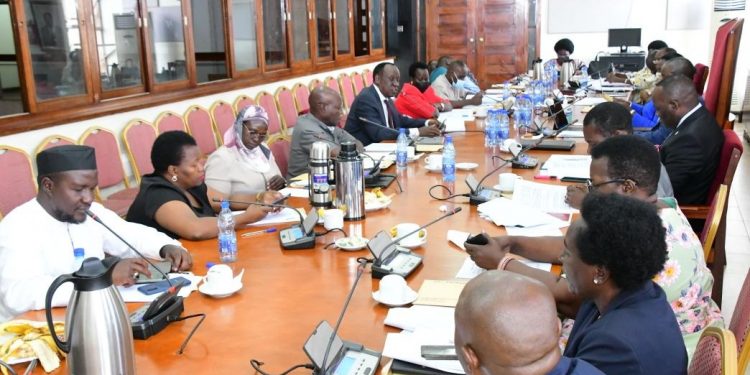 The parliament’s Appointments committee has today vetted and cleared former Police Spokesperson and former MP Simeo Nsubuga as a commissioner on the Uganda Human Rights Commission who was appointed recently with two others.

Recently President Yoweri Museveni appointed former police spokesperson, Simeo Nsubuga to the Uganda Human Rights Commission as a commissioner. Simeo was appointed together with Col. Rtd. Steven Basaliza the former MP Bulasha and Lamex Apita Omara to sit on the UHRC which has not been fully constituted to execute its mandate. Today the three face the Parliament’s appointments committee chaired by the Deputy Speaker Thomas Tayebwa for vetting.

Though many have seen his appointment as a reward from President Museveni to one of his cadres who played a vital role in the removal of age limit cap on presidential candidates during the 10th parliament, Nsubuga has dispelled the narrative saying he is not strange to human rights, having obtained a masters degree in the same field.

Coming in at the wave of abductions and enforced disappearance Simeo vowed to use his experience in the police force to engage security agencies in spotlight to abandon illegal arrests which are always done with impunity using infamous drone cars. Basariza shares a similar position on this matter.

Col Basariza has called for amendments in the UPDF act to protect civilians from being tried in the General Court Martial. Although the UPDF Act 2005 section 199(1)(h), states that every person found in unlawful possession of firearms, ammunition or equipment that is ordinarily a monopoly of the defense forces is subject to military law, Bashariza contends that civil courts have got enough capacity to try these cases.

The three commissioners have committed that it will not be business as usual during their tenure, should the appointing authority clear them after the vetting committee report.