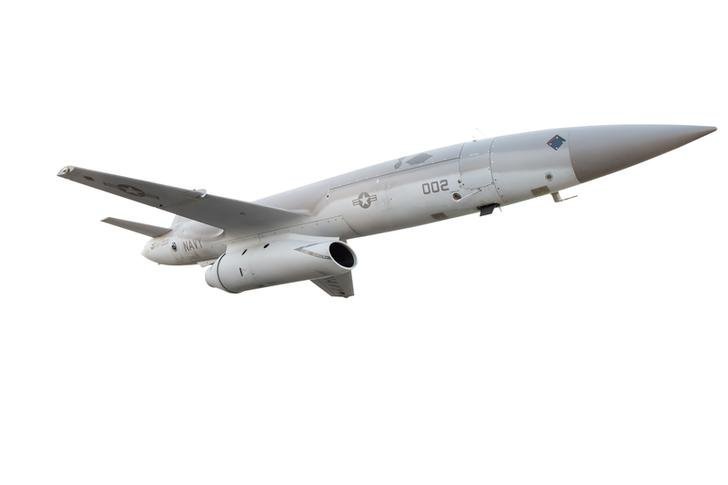 A Kratos Mako drone is shown in this undated photo provided March 19, 2018. Courtesy of Kratos Defense & Security Solutions/Handout via REUTERS ATTENTION EDITORS - THIS IMAGE WAS PROVIDED BY A THIRD PARTY NO RESALES, NO ARCHIVE

WASHINGTON (Reuters) – President Donald Trump will soon make it easier to export some types of lethal U.S.-made drones to potentially dozens more allies and partners, according to people familiar with the plan.

Trump is expected to ease rules for such foreign sales under a long-delayed new policy on unmanned military aircraft due to be rolled out as early as this month, the first phase of a broader overhaul of arms export regulations.

The White House is expected to tout the move as part of Trump’s “Buy American” initiative to create jobs and reduce the U.S. trade deficit.

Human rights and arms control advocates, however, warn it risks fueling violence and instability in regions such as the Middle East and South Asia. An announcement of the new policy has been held up for months amid deliberations on how far to go in unleashing drones exports. That delay prompted Defense Secretary Jim Mattis to write to Trump’s national security adviser H.R. McMaster to press him to expedite the policy shift to avoid losing out on sales to certain countries, an industry source and two U.S officials said.

A key thrust of the policy will be to lower barriers to sales of smaller hunter-killer drones that carry fewer missiles and travel shorter distances than larger models such as the iconic Predator drone, the sources said. Export regulations will also be eased for surveillance drones of all sizes, they said, speaking on condition of anonymity.

Even though Trump will stop short of completely opening up sales of top-of-the-line lethal drones, it will mark a major step toward overcoming a long-standing U.S. taboo against selling armed drones to countries other than a handful of Washington’s most trusted allies. Military drones have changed the face of modern warfare, with U.S. models in greatest demand.

Trump’s aides had initially focused mostly on devising ways to boost sales of “eye in the sky” drones used for tracking and targeting. But after a more than year-long review, they have crafted a plan that will reinterpret some rules to allow for more armed drone sales overseas.

A list of potential buyers being given fast-track treatment is expected to expand to include more NATO members, Saudi Arabia and other Gulf partners as well as treaty allies such as Japan and South Korea, the people familiar with the plan said.

Also likely to be in the favored group would be key partners such as India, Singapore and Australia as well as many of the 35 signatories to the Missile Technology Control Regime (MTCR), an international agreement that sets rules for export of missiles and related weaponry. The only sales of armed U.S. drones in recent years have been to Britain and Italy.

“We’re getting outplayed all over the world,” a U.S. official told Reuters. “Why can our competitors sell to our own allies the equipment they are clamoring to buy from us? This policy is meant to turn that around.”

A Trump administration official, responding to a request for comment on the story, said the U.S. government is seeking to “minimize the self-inflicted bureaucratic and administrative hurdles to U.S. competitiveness in the global aerospace markets.”

The official insisted, however, that any sales of armed drones would be in accordance with U.S. law and require that buyers adhere to international standards.

There was no immediate comment from the White House or Pentagon on the Mattis message to McMaster.

The smaller drones that meet the new export guidelines are expected to be much cheaper than high-end models such as the Predator and Reaper, both made by General Atomics, which cost up to $17 million apiece according to reports.

While they are less destructive than the larger drones, their firepower can destroy vehicles, small structures and armed positions.

U.S. officials contend that a more export-friendly approach will not only help meet Trump’s 2016 campaign promise to bolster America’s “defense industrial base” but also get foreign partners to take on more of their own defense costs.

An increase in drones sales “could put these weapons in the hands of governments that act irresponsibly with their neighbors and against their own populations,” warned Jeff Abramson, a senior fellow with the Arms Control Association, a non-partisan Washington-based organization focused on global weapons proliferation threats.

Trump’s predecessor, President Barack Obama, introduced revised rules in 2015 aimed at increasing military drone exports. But U.S. manufacturers complained they were still too restrictive. U.S. drone makers are vying for a larger share of the global military drone market, which the Teal Group, a market research firm, has forecast will rise from $2.8 billion in sales in 2016 to $9.4 billion in 2025.

The new policy is expected to be unveiled in coming weeks, people close to the matter said, though they also cautioned that the exact timing remains in flux.

Among the changes will be a more lenient application by the U.S. government of an arms export principle known as “presumption of denial.” This has impeded many drone deals by automatically denying approval unless a compelling security reason is given together with strict buyer agreements to use the weapons in accordance with international law.

One U.S. official said the new policy would “change our calculus” by easing those restrictions on whether to allow any given sale.

The MTCR – a 1987 missile-control pact signed by the United States and 34 other countries – will still require strict export controls on Predator-type drones, which it classifies as Category 1, those with a payload of over 1,100 pounds (500 kg).

However, the Trump administration is seeking to renegotiate the MTCR accord to eventually make it easier to export the larger armed drones.