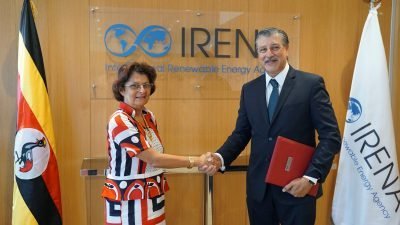 Ambassador Nimisha Madhvani presented her credentials as Uganda’s Permanent Representative to Adnan Z. Amin, Director-General of the IRENA, at a brief ceremony held on Monday 19-3- 2018 at the IRENA’s headquarters in eco-friendly Masdar City, Abu Dhabi.

In line with the 2030 SDG’s, The country attaches great importance and commitment to the renewable energy sector and believes that only through a concerted collaborative approach the goal of sustainable energy future can be realized for Ugandans.

The presentation of credentials further demonstrates the reconfirmation of the strategic vision and commitment of Uganda’s Head of State and Government to renewable clean energy and the broad socio-economic benefits open to Uganda.

IRENA is an inter-governmental Organisation that supports countries in their transition to a sustainable energy future and serves as the principal platform for international cooperation. It was founded in Bonn, Germany, in January 2009. It promotes the widespread adoption and sustainable use of all forms of renewable energy in the pursuit of sustainable development.

The African Clean Energy Corridor, which includes Uganda, is one of the major achievements of IRENA thus far.

She expressed full willingness and readiness to work with the Director-General and his excellent Team in IRENA to consolidate the good relations between Uganda and IRENA for mutual benefit of a sustainable future for ALL and the success of her Mission.

The Director-General expressed his appreciation for Uganda’s ongoing efforts at realizing its potential in clean renewable energy deployment in areas like rural electrification, enabling policy and legislative frameworks being put in place and renewed his commitment to continued IRENA support.

The Ambassador informed that Uganda is striving towards clean and renewable energy which is manifested in the setting up of alternate energy projects in biomass, Wind, thermal energy as well as Uranium enrichment for peaceful purposes. Uganda wishes further to develop solar energy to keep prices down and affordable to all and for industrialization as well.

She reiterated her commitment to work more closely with Irena and invited the DG to visit Uganda, the Pearl of Africa.

Amb. Nimisha Madhvani was accompanied to the credentials ceremony by Mr. Daniel Ssekabembe, Second Secretary at the Embassy.