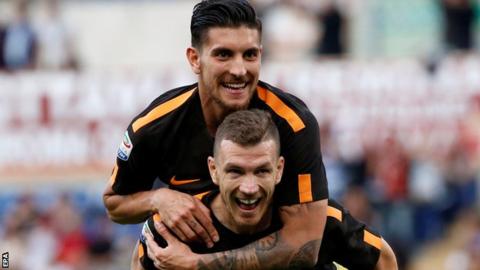 Dzeko’s volleyed finish added to Patrik Schick’s opener, but Juan Jesus conceded a penalty and was sent off after the break.

Alisson saved Roberto Inglese’s spot-kick, and Roma capitalised as Stephan El Shaarawy and Dzeko made it 4-0.

Inglese headed a consolation, but Roma moved above Lazio into third.

With three games to go, they have a four-point cushion over Inter Milan, who are outside the Champions League qualification places in fifth.

Eusebio di Francesco’s side face Liverpool in the Stadio Olimpico on Wednesday, needing to overturn a 5-2 first-leg deficit.

“We have to recover our physical and mental energy, leave the pitch on Wednesday knowing we’ve done all we possibly could,” said Di Francesco.

“We’ve proved in the past that we can achieve great results in the Champions League, so we must all believe.”

About 5,000 Liverpool supporters are expected to make the trip to the Italian capital for the second leg, a week after Sean Cox was left in a critical condition following an attack prior to kick-off at Anfield.

The Premier League club have been working with Roma, Uefa and the Italian police in the build-up to the tie.

On Saturday, Roma president Jim Pallotta hit out at a minority of supporters “giving the club’s fans a bad name around the world”.

“It’s disappointing to me that Rome and AS Roma get blamed for a few individuals who do stupid things,” Pallotta told the Roma website.

“I don’t know the whole story. All I’ve seen is what I saw on the video, like most others, and at least that part of the video with Sean is just the most disgusting stupidity and my prayers are for him and his family.

“What I want to talk about is how these games are great but they’re not life and death. What’s going on right now with Sean Cox in Liverpool, that’s life and death and that affects his family.”

Two Italian men have been charged over violence before the game and have have beenremanded in custody until 24 May.

In total, nine men were arrested for various offences during the first leg.

“We have a long history at Roma and what’s going on when you have a few stupid people is that they destroy our history and they attack our legacy and I’m tired of it,” added Pallotta.