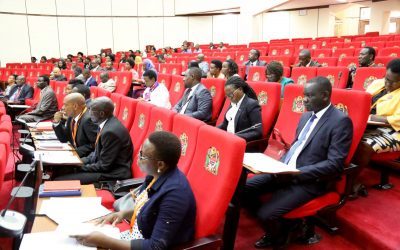 The passing of the East African Monetary Institute Bill, 2018 mid-this week by the Assembly prior to adjournment, is largely viewed as crucial and an initial step towards quest for the entry of the single currency for the EAC.

The Bill which now awaits assent by the Heads of State, was introduced to the Assembly by the Chair of Council of Ministers, Hon Dr Ali Kirunda Kivenjija, on February 8th, 2018 in Kampala, Uganda, at the 2nd Meeting of the 1st Session of the 4th Assembly.

So crucial is the Bill that Speaker, Rt Hon Ngoga Karoli Martin, congratulated the House immediately after its passage. “This is a critical Bill for the region and for the 3rd progressive pillar of the Monetary Union.  I thank the EAC Council of Ministers for initiating the Bill and the General Purpose Committee for scrutiny and look forward to its assent,” he said.

The Bill was preceded by a Report of the Committee on General Purpose on the same presented by the (Committee’s) Chair, Hon Abdikadir Aden. The report which followed public hearings, made salient amendments to the clauses of the Bill for further relevancy. The Committee sought the views of various stakeholders including the East African Business Council (EABC) and the Bankers Associations as well as other stakeholders. The EABC through Executive Director, Lilian Awinja urged the EAC and EALA to expedite implementation of the Bill which was overdue and which according to the timeframe was meant to have been in place in 2015.   It was pointed out that the functions of the Institute could be expanded to include, among others, attainment of macroeconomic convergence criteria and determination of conversion of rates and design of the single currency.

The East African Monetary Union (EAMU) is an important stage in the process of East African Community (EAC) Regional Integration. The EAMU Protocol was adopted in accordance with the EAC Treaty and signed on 30th November 2013. The Protocol lays groundwork for a monetary union within 10 years and allows the EAC Partner States to progressively converge their currencies into a single currency in the Community.