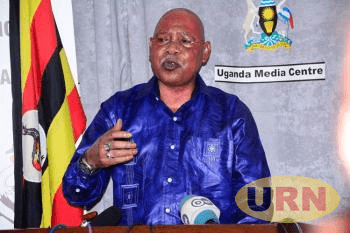 Share on FacebookShare on Twitter
By URN.
Internal Affairs Minister General Jeje Odongo has explained how two terror suspects were killed in a joint security operation at Usafi Mosque in Kisenyi, Kampala this morning.According to Odongo, the two suspects were killed inside the USAFI Mosque in Kisenyi following an attack on the security operatives who were pursuing a key suspect in the murder of the late Suzan Magara.Odongo addressed Journalists at the Media Center in the company of Assistant Inspector General of Police (AIGP) Abbas Byakagaba, the Director of Counter-Terrorism, Brigadier Richard Karemire, the Uganda People’s Defence Forces (UPDF) spokesperson and Police Spokesperson Emilian Kayima. “Following credible intelligence, one of the key suspects whose name we shall not reveal now to protect the investigation in the murder of the late Suzan Magara, run to USAFI Mosque in Kisenyi having known that he was being tracked by security agencies,” Odongo narrated.In the process, a section of those found inside the prayer place attacked the security operatives fatally injuring one of the operatives using a panga prompting a shootout that left two of the suspects dead.He declined to identify the deceased saying that police will first inform their family members. However, he said that the key suspect in the Magara murder is not among the dead. //Cue in: “so the death…Cue out:…apprehend the suspect.”// Odongo dismissed initial reports indicating that 12 other boys had been killed in the joint security operation.  Suzan Magara was early this year held by kidnappers for 21 days and later killed and her body dumped along Entebbe road. There have been scores of arrests since, the most prominent being of a one Patrick Agaba aka Pato, who was arrested in South Africa in what intelligence sources said was a breakthrough in the investigations. According to Odongo, the joint security operation that involved Police and the Army saw the arrest of 36 suspects from the mosque and a number of weapons used in committing heinous crimes seized. The weapons sized include 60 rounds of ammunition, bows and arrows, 23 double-edged pangas and one laptop.  The 36 suspects arrested are currently under police custody and will soon record statements for prosecution purposes. Children and Women Rescued In the same security operation, Odongo revealed that 94 children and 18 women believed to have been kidnapped were rescued from the USAFI Mosque. He said that the children and women looked traumatized and scared. Odongo revealed that the 94 rescued children are not only from Uganda but of an international congregation citing some being from Rwanda, Burundi and Kenya. The Children and Women are currently at Police’s Child and Family Protection Unit with Odongo saying that they are making arrangements for identifying them and handing them over to their families.  Abbas Byakagaba, the Police Director of Counter-Terrorism also confirmed the rescue of the women and children noting that the arrested 36 suspects are to further help police in its investigation. Mosque Cordoned OffBrigadier Richard Karemire, the Uganda People’s Defence Forces (UPDF) spokesperson told URN that the mosque is currently cordoned off and considered a scene of the crime. He said that they have deployed at the scene with no one allowed to access the prayer place.
Ends
Previous Post